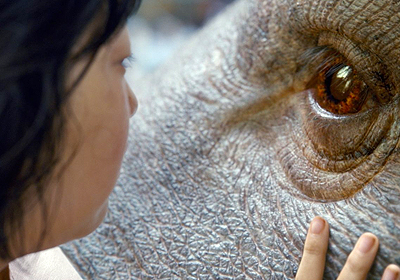 "In throwing my hat into the ring, I can say that Okja isn’t a film that is going to convince you of the dangers of Netflix - far from it, it’s easily one of the most unique pieces of cinema this year"

Netflix have been slowly establishing themselves in the world of film production for some time now, branching out from their endless television box sets to back unique voices less favoured by traditional studios. So far it’s been largely quiet indie fare - that is, until Okja.

To say that this film has caused a stir is an understatement. Its presence at Cannes Film Festival to compete for the Palme d’Or earlier this year dominated the entire festival, dividing film critics and filmmakers between those who see streaming services as the harbingers of doom, to those who see it as a welcome addition to the world of cinema.

In throwing my hat into the ring, I can say that Okja isn’t a film that is going to convince you of the dangers of Netflix - far from it, it’s easily one of the most unique pieces of cinema this year. Even better, its presence on streaming services means it will potentially meet a huge audience otherwise deterred by the idea of a low-fantasy film so strange it’s hard to describe.

Directed by Bong Joon-ho (Snowpiercer), and written in collaboration between the director and legendary gonzo journalist Jon Ronson, the film follows a young girl called Mija (Ahn Seo-hyun) and her giant ‘super-pig’ pet, Okja. Their tranquil time growing up together in the Korean countryside is rocked by the revelation that Okja is owned by a powerful meat-manufacturing company, led by Lucy Mirando (Tilda Swinton). Now Mija has to protect her best friend from a grim fate.

The most wonderfully fantastical element first comes from Okja herself. Beautifully rendered to look natural amongst the various settings, she’s gentle and goofy enough to warrant a stuffed toy made in her image. Her relationship with Mija is adorable, and one that will be familiar to anyone who has been lucky enough to form a friendship with an animal.

What this film isn’t however, is suitable for kids. It’s incredibly dark throughout, taking on the callous brutality that large corporations have brought to food production and peppering our vision with characters who regularly border on insanity. Shout out to Jake Gyllenhaal at this point, who plays a deranged television presenter in a boundless performance that inspires both laughter and disgust.

It doesn’t just attack the corporations however - aware of the hypocrisies on both sides, we’re introduced to a group called the Animal Liberation Front. One can’t help but think of Monty Python references with that name and led by Jay (Paul Dano), they’re a well-meaning bunch that tie themselves in knots with strict rules and bureaucratic formalities. Their bickering is genuinely funny, whilst Dano brings both his knack for comedy and an eternally youthful face into one fascinating character.

Part black comedy, part fantasy, Okja is an brilliant example of how important it is to fund bold and unique voices with trust. Filmmakers are turning to Netflix in the knowledge that unlike major studios, they’ll be allowed to create something that doesn’t have to satisfy the whims of producers in penthouse suites. With that trust, we get a breath of fresh air like Okja, where films are allowed to be cynical, polarising, funny and heartbreaking without worries of the censors or perceived box office sales. Okja, coming to a 32 inch plasma near you.