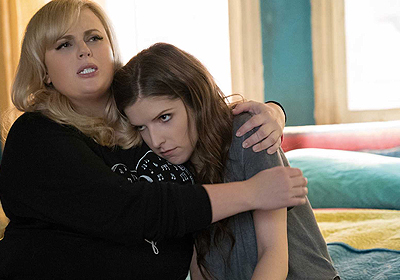 "An out of tune finale, the ladies of Pitch Perfect deserved a better farewell"

Five years ago, a ragtag film about an after college club of misfit acapella singers become one of the biggest musical outings of all time. Remixing popular and classic songs as well as introducing us to Anna Kendrick, Ester Dean, Rebel Wilson, and Brittany Snow, the outrageously funny and ultimately catchy film became a smash hit.

Of course, anything that is remotely successful often denotes a sequel and the haphazard Pitch Perfect 2 came into our lives reminding us exactly why, in Hollywood, we can’t have good things.

We also can’t have a pair of things and a duo predictably became trio with the impending release of Pitch Perfect 3.   Pitch Perfect 3 takes place three years after the previous outing. Our plucky troop of Bardem Bellas are bored with their everyday lives and miss the world of collegiate singing. When invited by Emily to see a performance of the new Bellas, the girls reunite and reminisce, leading to Aubrey putting them on an Army tour roster. Here they have to compete with actual bands and impress the tour’s host DJ Khaled and proof that they aren’t passed their prime.

There is a scene in Pitch Perfect 3 where Fat Amy literally punches a balloon shark at an aquarium and it is the most perfect metaphor for how this film jumps one...a shark that is. The film is absolutely bat-shit bonkers, veering off to different and crazed story-lines that don’t make much sense. The film would be fine if it focused on the, admittedly cheesy and unoriginal, tale of touring and rediscovering themselves and what makes them tick. Instead, they add this really random Fat Amy storyline about her father returning. It turns this whole tepid malarkey into this random overcomplicated mess.   Throwing in whatever offensive humour they can, Pitch Perfect 3 wastes it’s talent, especially the new faces. Ruby Rose and the rest of the bands who showcase their rocking expertise to intimidate the Bellas end up almost disappearing throughout the rest of the film. What could’ve been Treblemakers and Das Sound Machine levels of antagonists are substituted for a ridiculously strained action plot. Yes, you read that correctly, an action plot. That includes John Lithgow. Yes, that’s right: John Lithgow.

It’s disappointing. I cannot stress how brilliant the original Pitch Perfect was. The movie had a lot of heart, it focused on University life and accepting friendship. It had soul and talent. It had a few outrageous moments but focused on the enjoyment of the music and the women. It worked all together fantastically. It seems so strange that the same writer Kay Cannon (who wrote the book) would let the trilogy get so out of control.

Now it has become soulless; overblown budgets wasted on big showy sequences and forced humour. Here old beloved characters are squandered or replaced and the plot twists ridiculously through the story. This is a bizarre and ultimately boring escapade for the Bardem Bellas.

An out of tune finale, the ladies of Pitch Perfect deserved a better farewell.