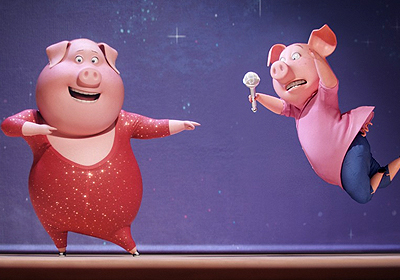 "warm mix of humour, music and wholesome plot anyone can enjoy and I can honestly say its heads and tails above most of the family movies released last year"

One of, if not the first big family movie of the year this side of the pond, Sing premiered at last year's Toronto International Film Festival and was praised highly however it wasn’t as heavily marketed as Illumination Entertainment's other larger IP’s such as Despicable Me and its Minions spin off. This lead me to not know exactly what to expect heading into the screening, what I got was 1 hour and 48 minutes of quite brilliant family fun, with a lot of smart humour to satisfy both the children it's aimed at and the parents that have been dragged out to it.

The film boasts an impressive cast including big hitters such as Matthew McConaughey, Reese Witherspoon, Scarlett Johansson and John C. Reilly but also Family Guy’s Seth McFarlane, Kingsman: The Secret Service’s Taron Egerton and established singers Tori Kelly and Jennifer Hudson. This works extremely well within the context of the film and at no point are you distracted by who is providing the voices in this animated feature. There is also the matter of the soundtrack, its extensive, eclectic and a pleasure to listen to. You’ll recognise almost every song if not all of them on a first listen and if you’re anything like this reviewer you’ll be fighting to stop yourself singing along at more than one point during the film. There are maybe a few initially odd choices included; I personally never thought in my life that I needed to see three animated frogs singing Van Halen's “Jump” however upon viewing I realise just how wrong I was!

The plot itself had the potential to be either terrible or amazing; with it being centred around a plot to save an old theatre which has clearly seen better days by hosting an X-Factor/American Idol style singing competition. Considering how many of these kind of shows are on the air at present it will have been quite the task to create a compelling story that appeals to the whole family with this subject matter. It is however done brilliantly, nothing in the plot feels tacked on, there are in fact many gags which reduced the majority of the viewers into fits of laughter balanced out with touching sentimental moments which are equally well executed. Perhaps my only criticism of the plot is that it may be initially hard to enjoy if you’ve been soured towards the constant talent show element of society, realistically though even those with a heart of stone would have a hard time not warming to this comedy.

To summarise, if you don’t like music heavy movies or animated films this likely will not appeal strongly to you, however I would urge anyone reading to give it a shot. It's easy to say in January that this is the standard a family film needs to beat, but it is precisely that. A warm mix of humour, music and wholesome plot anyone can enjoy and I can honestly say its heads and tails (pardon the pun) above most of the family movies released last year. regarding the soundtrack mentioned earlier it has a distinct advantage that if your kids love this movie then you honestly won’t mind having them play the songs over and over again.

I would happily give this 4 out 5 stars, and now if you don’t mind i’ll be attempting to not to utter the words “Piggy Power” and chuckling to myself.