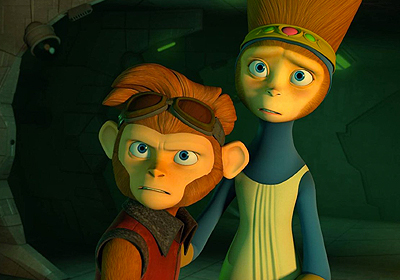 "the animation is beautiful and it leaves you wanting more, backed up by a wonderful soundtrack"

I unashamedly love animated films, there is always something to latch on to, to engage you and take you on the journey that is being presented on screen, and this is the same for the subject of today's review; Spark, which in some territories is known as Spark: A Space Tail.

Spark is the latest animated feature to come out of ToonBox Entertainment distributed in the UK by Kaleidoscope Entertainment and it doesn’t disappoint. It is your classic story between good and evil played out with a Monkey, a Fox and a Pig taking on an oppressive, tyrannical dictator.

So we open on the planet Bana as we see the destruction that befalls it at the hands of the evil power-hungry overlord Zhong (Alan C. Peterson) using a beast known as the Kraken to lay waste to the planet. Saved from the destruction, Spark (Jace Norman) who is just a baby at the time of the devastation is raised by Bananny (Susan Sarandon) and the resistance.

Fast forward thirteen years, and Spark wants to help, he's fed up of living in a rubbish dump (a shard that is a left over remnant of the devastation of Bana), he intercepts a communication that was meant for Vix (Jessica Biel) and Chunk (Rob deLeeuw) and sets out to take on the mission and unexpectedly meet The Queen (Hilary Swank) who gives him orders that he is meant to relay back to Vix and Chunk, however being a rebellious teen, he doesn’t, and his adventure to stop the evil overlord Zhong begins. Along the way, he meets The Captain, expertly voiced by Sir Patrick Stewart and unexpected truths are revealed to him.

Lead by the vocal talents of Jace Norman as our simian protagonist, Spark is an incredibly fun film, with the supporting voice cast of Stewart, Biel, deLeeuw, Swank and Peterson all embodying their roles giving us an engaging and thought provoking film that is fun for the whole family, whilst also having darker undertones with its subject matter.