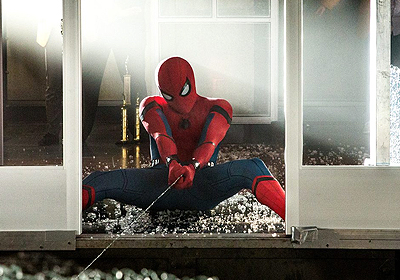 "this is what you’d expect from a Marvel Studios production; it's fun, it's big, it's visually spectacular"

One major thing stands out as you watch this film... Well actually tonnes do but this one thing above all others is that without Avengers Assemble this film would not have happened. By this I don’t just mean that the success of the 2012 kickstarted a series of events allowing a bridge to be built between Sony & Marvel, but literally a huge amount of the plot hinges around the battle of New York and the clean-up in its aftermath. Is it a bad thing? Not as such but you are constantly being reminded of it throughout the film.

We join our titular hero shortly after during/after (depending on where you consider the flashback/opening scenes to finish) the Team Cap Vs Team Stark face off during Captain America: Civil War and we see Peter Parker trying to adjust back into normal life after tasting the big time, to reveal much more would be a disservice and frankly I wouldn’t wish to spoil it for anyone, however there are a few things to talk about before you see this.

It’s a healthy mix of new and old, much of the inspiration is seemingly being taken from the Ultimate Spider-Man continuity in the comic books, from Peter being significantly younger than we have seen before and seems to find himself struggling with being both himself and being Spider-Man, harder than previous iterations have. A few notable things aren’t touched on either, there’s not much in the way of an origin story at least powers wise, no mention of Uncle Ben Parker and Mary Jane Watson is nowhere to be seen. This is good as it really does feel like a much fresher take on the Spider-Man lore than previously has been shown.

Tom Holland does a superb job of showing the weight put on our hero’s shoulders and comes across as superbly well prepared for the role whilst also incorporating a touch of the trademark web head witty comments to satisfy most fans. Robert Downey Jr. shines as he always does playing Tony Stark, who this time steps in, in much more of a mentor role rather than his usual show stealing self. In the context of the story this works brilliantly and sets up much of the drama between the pair.

I also couldn’t review this with any shred of credibility if I didn’t mention Michael Keaton’s superb villainous turn as The Vulture aka Adrian Toomes, he exudes a menacing charm throughout and is part of one of the best twists in recent film history.

As much as I liked the film here’s the potential downside, there’s a good chunk of the plot that feels like a teen drama rather than a superhero movie, whilst for most this isn’t necessarily a bad thing it did create a bit of a weird juxtaposition in my opinion. On one hand, yes there’s a lot here for both younger and older viewers to enjoy, action, comedy and even romance is catered for. On the other hand, if teen struggles aren’t your thing, you might not engage with this as much as previous incarnations.

To summarise, this is what you’d expect from a Marvel Studios production; it's fun, it's big, it's visually spectacular, at points it’s the Breakfast Club or Ferris Bueller with superheroes.

I give it 4 stars, which it gets narrowly, not because it’s in any way bad, but just because it didn’t click with me, the upside being by the time we get a sequel, Peter will be just the right age to mesh with everyone and with Avengers: Infinity War on the horizon prepare to see a lot more of the friendly neighbourhood Spider-Man!

Oh yeah, make sure you stay patient as you wait for the post credits scene... it’s not to be missed…