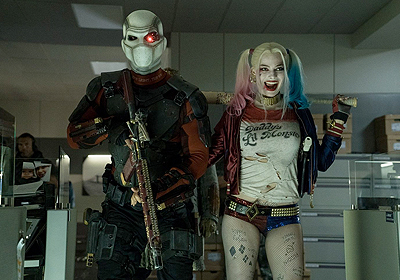 "a highly entertaining Super Villains film that successfully brought to the screen a story that, for once, shows a different perspective to the bad guys"

Following the latest disappointing and quite confusing DC film, Suicide Squad can be considered as the proper Super Villains movie response to every DCEU film. Warner Bros did a marvellous job in keeping the plot under wraps without spoiling the surprises even after releasing many trailers and clips during San Diego Comic-Con this past weekend. For this reason, not going into detail about the story is the best way to review this movie because experiencing the film without knowing what will happen, makes it even more enjoyable and entertaining for the audience.

For the first time since the digressing and elongated Man of Steel, Suicide Squad doesn't lose itself in confusing flash-forwards or the overuse of background stories; from the beginning, the story is linear and it introduces every character one by one, without indulging too much into their past whilst giving enough information to make them human.

It is precisely the need to showcase their most vulnerable side that is the focal point of the movie, which is to expose and exploit these inhuman creatures and killers' humanity, making them liable in order to control them is what Amanda Waller (Viola Davis) does best, making the good guys look bad and the bad guys look more human and kind of heroic.

The cast ensemble did a brilliant job in bringing to life the famous comic book characters. Among them, the ones that give their full commitment are Will Smith (Deadshot), Margot Robbie (Harley Quinn) and Jay Hernandez (Diablo); their characters are the most complex and well rounded of the group, making them the most interesting and layered of the squad. They hold the weight of the movie on their shoulders because they completely stripped themselves of their own personalities to embody their characters and understand their flows and good qualities.

The bond within the group is strong and it appears on screen in full force. Throughout the movie there is an ever present comedy thread that makes the story lighter in all the right moments. Will Smith and Margot Robbie, along with Jai Courtney, are the ones in charge of keeping the comedy side of the film alive and kicking. Their interactions are always on point and the comedy timing is flawless, making the movie fly by effortlessly.

Viola Davis, as usual, brought to the screen a complex and tough woman who is ready to do whatever it takes to protect her country, her ruthlessness is clear from the first scene and she stops at nothing to get what she wants. Her determination and cruelty helps create that shift between the canonic traits that everyone is used to seeing in the good guys and the bad guys, highlighting that grey area between right and wrong, evil and righteousness.

Fortunately there are only few negative aspects of the movie, namely Jared Leto’s Joker and Cara Delevingne’s Enchantress; Leto has few scenes in the film, however his performance is not as strong as it would appear in the trailers; his interpretation of the iconic and imfamous villain falls short compared to the other characters, it feels like he tried too hard to be this complex, mad and erratic man obsessed by his former psychiatrist and, in doing so, he made him a parody of himself making it difficult for the audience to take him seriously.

The same can be said for Cara Delevingne. On paper, June Moone/Enchantress is a perfect character; a powerful ancient goddess capable of controlling everything; manipulating objects and people’s minds just with the nod of her head. However, Delevingne completely missed the point by trying, and unfortunately failing, to showcase this character’s sensuality and power.

However, the rest of the cast, the killer soundtrack and the amazing choreography used during the fight scenes, made the movie worth watching even with these small flaws.

All in all, Suicide Squad is a highly entertaining Super Villains film that successfully brought to the screen a story that, for once, shows a different perspective to the bad guys, highlighting their humanity and loyalty, two qualities that usually belongs to the heroes.

And, finally, when you go to the cinema to watch it keep an eye out for a few easter eggs peppered throughout the film and to the scene at the end of the credits, they will give you a small insight into what's to come in the DC Universe.