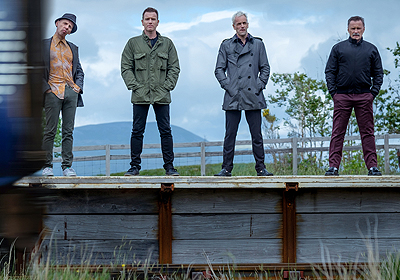 "fun tribute to the original 90s film that will delight fans, retaining that affection for the characters and continuing their stories in a way that is suitably unfinished"

It’s not an understatement to say that the original Trainspotting is a Scottish institution. It’s become part of the fabric of the culture, a visceral portrait of the dark side of Scotland that romantic historical films like Highlander and Rob Roy had no chance of capturing. An honest face of this country is one that includes broken families, fierce modern tribalism and places wracked by poverty and addiction.

Yet the film didn’t go for the classic angle of portraying those at the rough end of life with a pitying air of angelic suffering. No, Trainspotting, based on the book by Irvine Welsh and directed by Danny Boyle, humanised these characters in a way that gave them agency and recognised their own complexities. It also injected some much-needed humour, backed up by a fantastic cast whose talents have since been recognised farther afield.

However, after these last twenty years since the film, the primary setting of Leith in Edinburgh has been undergoing gradual gentrification, whilst many of the Glasgow blocks that stood in for filming in 1995 have been demolished. Not only that, but Scotland has been going through its most turbulent historical period in recent history, where the nature of Scottish identity has come to mean everything.

The much-anticipated sequel, T2 Trainspotting decided to cope with this changed landscape by looking back, it seems. Directed again by Boyle, it begins with Renton (Ewan McGregor) returning from Amsterdam, a move funded by the money that he stole from his three friends at the end of the previous movie. He finds his friends still fighting the world and before long, gets sucked into their next business ventures.

Impressively, it retains the same editing style, a frantic mix between pop culture and the messy lives of its characters. There’s a few cameos from familiar faces, including the novelist of the original text in a brief scene. Most importantly, this film is self-consciously scattered with nostalgia, as rose-tinted scenes of the characters in the previous film, and even earlier as children, infuse the narrative.

It reflects the natural evolution of age - whilst the original Trainspotting still retained a boyish optimism amongst the self-destruction, T2 has grown up along with the characters, facing the way their circumstances have or haven’t changed. However, it doesn’t let itself become too heavy-handed thematically: in fact, at one point, Jonny Lee-Miller’s Sick Boy calls out Ewan McGregor’s Renton for his visit to past haunts.

Despite all this nostalgia for the past, and the seemingly changed landscape of the cities, the issues that face them remain the same two decades on. The shallow obsessions called out in Renton’s iconic ‘Choose Life’ speech have faded, but there’s plenty more to replace them in a revised version. As much as the group remember their youth fondly, chances are that they’ll remember these dark scenes with as much affection in the next twenty years.

Most importantly for those north of the border, T2 Trainspotting retains that crucial, almost exasperated love for the people of Scotland. A scene in a backwater Glasgow pub unveils a hidden sectarian tribalism that those who live here will recognise as being alive and well, despite attempts at legislation.

Likewise, the authorities come across as well meaning but ultimately detached, as Renton and Sick Boy manage to convince a Scottish Government organisation to fund a disreputable establishment. Whilst it’s an entertaining scam, it’s also a reminder that the characters of Trainspotting exist in a world deliberately neglected by those in authority.

T2 Trainspotting is a fun tribute to the original 90s film that will delight fans, retaining that affection for the characters and continuing their stories in a way that is suitably unfinished. Yet whilst the music remains bombastic and the editing frantic, this movie moves on with a loss of the boyish boundless optimism that propelled the original.

It doesn’t suffer for it, but it does make T2 Trainspotting slightly more subdued and less impactful. Declaring an exhaustion with current day, it’s too tied in the past to become emblematic of current culture, something that it’s predecessor did so well. In an era where nostalgia is a strong escape though, does it hurt to look back instead? Renton and his friends don’t seem to think so.