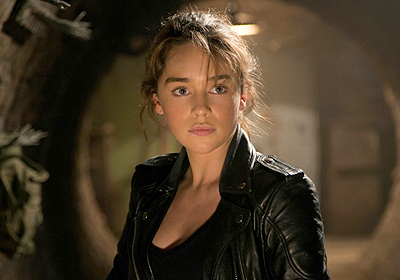 Like most people, I was excited to see another Terminator film. Seeing Schwarzenegger back in his iconic role as the T-800, Emilia Clarke as the iconic heroine Sarah Connor, and a new twist on the mythos with an enjoyable two hour thrill ride.

Unfortunately the trailers do a wonderful job of spoiling key plot points and it would have been better not knowing.

So the film starts off strong in 2029 in the midst of battle, as Kyle Reese (Jai Courtney) narrates and fills in some backstory. Since I’ve seen all the Terminator films, this feels a bit unnecessary, but for those that haven’t, it’s a good thing to have.

As the plot kicks in, the resistance storms a Skynet base led by John Connor (Jason Clarke) and in taking the base, they discover a time displacement machine that Skynet has already used to send a Terminator back through time. Kyle is sent back to stop Skynet’s Terminator from killing Sarah Connor in 1984 (where the original film is set).

It’s here that there is somewhat of a twist on Terminator and Terminator 2: Judgement Day, by blending the two films together. It’s nicely done but does suffer by having a 12A rating, since the original and Terminator 2: Judgement Day were allowed to be as gory as they wanted to be and deemed fit for the audience. To basically neuter Terminator: Genisys means it suffers because there does seem to be a lack of stakes and peril in the film by handcuffing it, and boy does it suffer.

That isn’t to say that the film isn’t without merit. The action set pieces are great and Emilia Clarke is impressive as a young Sarah Connor, as she does a great job channeling Linda Hamilton whilst also making the character her own. Byung-hun Lee is great as the T-1000, however, the effects - which I think are intended as a homage to Terminator 2: Judgement Day because it looks about the same - are a nice call back.

Even if Byung-hun Lee is severely underused, he’s great when he is there: menacing but with a 12A rating, his T-1000 is somewhat hampered in a way that Robert Patrick’s T-1000 wasn’t.

J.K. Simmons and Matt Smith are also severely underused. Their storylines are interesting but I would have liked to have seen more from them.

At the end of the day, Terminator: Genisys will be unfairly and unmercifully slated and compared to The Terminator and Terminator 2: Judgement Day. It isn’t a terrible film but it fails to recapture the magic of the far superior T1 and T2. That said, it is better than its two previous outings.

Obviously this wouldn’t be Terminator without Schwarzenegger, who, for me, was definitely the stand out. That may be easy to say, but to see him go toe-to-toe with a younger version of himself was great, and to see the ageing T-800 as old but not obsolete was incredible. Right down to the use of his classic one-liners, he knows this role inside out, and whilst Director Alan Taylor and his writing team have added to the mythos, the core of what The Terminator is, remains intact. They’ve tried to craft their own film, and whilst it is enjoyable, I can’t help but wonder that, if they weren’t handcuffed to the 12A rating, it would’ve (and could’ve) been a much better film.