The Revenant(2016) by Federica Roberti 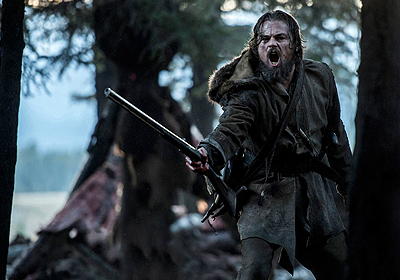 "a film that in many ways challenges modern, traditional film making by pushing its boundaries and it succeeds in doing so with the help of an extremely talented cast"

After having a great awards season in 2015 – one that culminated with several Oscars for Birdman - this year Alejandro G. Iñarritu has the chance to show once again what it takes to be a strong, innovative and daring director in his latest demanding project The Revenant.

It took two years of massive pre-production and several months of shooting in order to bring to life this thriller-drama and what makes it a well-rounded project is the combined effort of relentless search for authenticity and the need to overtake the boundaries in filmmaking.

The plot in The Revenant takes inspiration from real life events. During a fur expedition in the American wilderness in 1820, Hugh Glass (Leonardo DiCaprio) gets badly injured by a bear. In a desperate attempt to save his life, his captain tries to bring him back to the fort. During the journey back, however, it becomes riskier to carry him because of the extreme weather conditions and because a group of Native American warriors are following them in order to find the Chief's daughter who was kidnapped from their village.

Under the Captain's order to wait for them to bring help, Hugh is left under the care of two of his fellow traders and his son. Hugh, after being left for dead, fights against death to avenge his family and seek redemption.

What makes The Revenant such a great movie is not the plot itself, which has a standard story of redemption, resolution and strength, but the filming technique that was involved in its production.

Iñarritu and his cinematographer Emmanuel Lubezki wanted a film that could be as authentic as possible. For this reason every scene was shot without using CGI, and just relying on the natural light provided on location. It is precisely the location that posed the greatest challenge for this particular project. By filming the movie in the wildest, untouched areas of Canada, the cast and crew had only mere hours to shoot in chronological sequences and, for this reason, the movie is composed by small bits and scenes assemble together in a perfect flow.

However, even though the harsh condition made it harder for the crew to work, the final product is an astonishing movie that is reminiscent of a well made documentary without foregoing the emotional connection needed in every film. In The Revenant the point of view is objective: the camera follows closely every character without taking their parts or painting a picture in favour of either the Native Americans or the traders.

Even though there is plenty of violence, the main focus stays on the personal journey that Hugh Glass undertakes in order to avenge his family and to redeem his soul. It is the love he carries for them that gives him the strength to fight for his life, even when his body has been literally torn apart.

The cast ensemble does an impressive job. In fact, while Leonardo DiCaprio is capable to carry the whole movie by himself, even without talking for most of it, the rest of the cast, especially Tom Hardy and Domhnall Gleeson, give the perfect support to the main character. The strenuous conditions in which they had to perform only add to that level of authenticity that Iñarritu was looking for. DiCaprio loses himself in Hugh Glass, embracing his flaws and making his mission his own over the duration. His performance isn’t over the top, it’s just perfect to show his commitment to the story.

All in all, The Revenant is a film that in many ways challenges modern, traditional filmmaking by pushing its boundaries and it succeeds in doing so with the help of an extremely talented cast, a breathtaking scenography and astonishing directing.