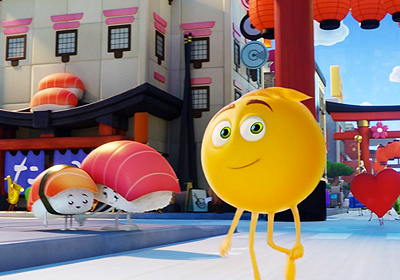 "Children are smart, creative, imaginative, and so much more. They deserve adventures worthy of their time and attention"

The first announcement of The Emoji Movie was met with moans and denouncements even before the trailer landed. After images and footage landed in our laps, this all seemed like a money-making corporate scheme to monopolise on the societal enjoyment of pressing cartoon faces as a way of expressing oneself. There was an air of disdain. Unlike similar movies such as The LEGO® Movie or Wreck-It Ralph, the secret world of mobile phones was an adventure no one wanted to explore except producers Sony, seemingly. Exasperated, many were already bemoaning how utterly terrible this all looked without ever seeing a frame... Of course, they were bloody right: The Emoji Movie is utterly terrible.

The paper thin plot revolves around Gene, a “Meh” Emoji who cannot keep a straight face. His excitement means he keeps changing expression, which is taboo in the world of Textopolis. When he makes a mistake on the job, he is banished as a malfunction and has to escape malware threatening to kill him off forever. With the help of High Five and a hacker called Jailbreak, Gene tries desperately to fix his problem and become a permanent fixture of The Cube.

Physically shaking from rage as soon as I left the cinema, The Emoji Movie is a soul-destroying and heart-breaking exploitative film. It clearly tries to score points off more accomplished and poignant films such as Inside Out but fails because its humour is thin, the characters are worthless, and is basically an insanely long advert for Smartphone companies. Owners of popular Apps will delight in characters saying Spotify Highway or having a DropBox rollercoaster. In the YouTube Room, there’s even a nod to that incessant Pineapple Pen song as though The Emoji Movie couldn’t sink below it’s already shallow film.

While the voice acting is generally a quick pay check for all involved including the infamous casting of Sir Patrick Stewart as the Poop Emoji, James Corden’s hyperactive and boisterous high-five is like his giant hand is slapping you in the face repeatedly. The almost shrill sidekick is the most irritating screen presence of this year. Unlike muted efforts of his live-action films, Cordon’s incessant character boisterously overshadows any effort from T.J Miller’s Gene which is, altogether, Meh.

It’s going to take a lot of cinematic therapy to get back the hour and a half lost on The Emoji Movie. There is still an air of disbelief that this is a movie product that actually exists and people will inevitably go watch it. Trust me, there are better movies out there to enjoy and this will only reduce you to anger. And it’s not just because it is bad, it’s because the younger audiences deserve better. That air of patronisation clings to every second of the film.

Children should enjoy this, right? Because of the funky colourful characters and we’re all addicted to our phones right? That will appeal to them, right? Right?! Wrong! Children are smart, creative, imaginative, and so much more. They deserve adventures worthy of their time and attention. They do not deserve The Emoji Movie.