The Girl on the Train(2016) by Federica Roberti 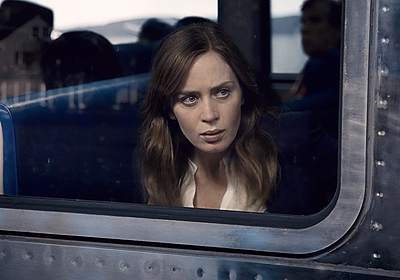 "thanks to a brilliant cast and a deep and interesting storyline, The Girl on the Train is a gripping thriller that will leave the audience captivated and glued to the screen until the very end"

Adapted from the homonymous New York Times' best seller, The Girl on the Train is a psychological thriller that, by using the first person narrative, pushes the audience in identifying themselves with the protagonists and step into their minds.

The story is split into three different points of views; it starts by introducing Rachel, a young woman who spends her commute to Manhattan looking out the train's window towards all the houses built near the railway. It is instantly clear that there is something wrong with her and by listening to her voice narrating her story, it becomes evident that, after going through a tragedy and a divorce, alcohol has become her only outlet. In her deluded and devastated state the only way to escape reality is to image what life is or could be for the families living in the beautiful houses across from the train station.

What Rachel sees from her seat, however, doesn't always match reality. And when Megan and Anna's point of view are firstly introduced, the families that Rachel observes through the window become part of the story it is at this moment that the audience learn that these three women are connected together.

In fact, Rachel, in her deranged and confused state, is obsessing over her ex-husband, who married Anna, his mistress. And when she is imagining Megan's perfect life in the house close to her former home, she doesn't know that Megan is working for Anna and Tom as a nanny.

All three of them have something in common in their lives; they are all struggling with motherhood or the desire to have a child or not wanting a baby at all.  However, the status quo is bound to be broken when Rachel, after another day of binge drinking, sees from the train that Megan is cheating on her husband with another man. After seeing the perfect fantastical reality she created shattered, she decides to pure her hatred and rage towards Megan, because she ruined everything, just like it happened to her failed marriage.

The day after, Rachel wakes confused and disoriented and on the news the reports are all focused on Megan's disappearance. Filled with guilt and self doubt, Rachel starts her quest to remember what happened after she left the train to chase Megan.

Most people will feel compelled to compare the book to the movie, highlighting what is different and what was kept like the original written piece. Having said that, even though the movie suffered from a change in location for the story, the successful soul of the book is still there, alive and kicking.

For a film with a cast ensemble that give it all to bring to life as truthfully as possible these complicated characters, The Girl on the Train, directed by Tate Taylor, has some faux pas that made it quite difficult for me to be completely satisfied with the final result.

Directing wise, Taylor was capable of capturing Rachel's internal and external turmoil and her ever present confusion caused by alcohol and the obsession over her old life. The many close ups on all the characters help to keep that idea of disorientation and fogged recollections throughout the film, maintaining the halo of mystery till the end.

However, the time jumps between present and past, and the change between the three female point of views are quite hard to follow and they become quite confusing if it wasn't for the black screen with the time frame written before any flashback.

Emily Blunt carries the movie on her shoulders; her interpretation and understanding of Rachel's coping mechanism to her tragedies are flawless, the smudged make up and her sense of confusion, brought by lingering hangovers following her heavy drinking sessions, help the audience understand this woman's desperation after seeing her life shattered. Justin Theroux did a terrific job in losing himself in Tom and the changes his character goes through in the movie are staggering and made him one of the best unexpected character evolution in a thriller. However, there are some aspects in the depiction of these characters that make the film hollow and almost incomplete.

While the three main female characters had the potential to be well rounded and complex, for the most part it seemed like they are just flat and convinced that their sole purpose in life is to be mothers and devoted wives. Since Rachel failed in both "tasks" she becomes an alcoholic to cope with her lack of femininity. Anna, after fulfilling her duty as a mother seems incapable of doing anything that doesn't involve her child. However, she is also unhappy because being a full time mum and going shopping is tiring and she needs Megan's help everyday to "survive". For her part, Megan embodies the other woman to a T. Young, attractive, with an active sexual desire that needs to be always fulfilled. She is fragile, but hides it behind her powerful sexuality. She doesn't want to be a mother, but she is pushed by her husband to be a nanny so she can turn on her maternal instinct.

The same thing can be said for the men; both Luke Evans and Justin Theroux's characters are abusive, possessive, hyper-sexual masculine character who like to control and mentally cage their women into thinking that they exist only to please them.

These stereotypical characterisations make it almost infuriating to see their story unfold, because they seem like an over exemplification of a reality every woman is still living to a certain extent. However, while the characters are just superficially outlined as if they were living in the 1940s, the plot thrives in surprising and shocking the audience.

Psychological manipulation, along with mental and physical abuse are important aspects highlighted in the movie; the perspective changes along with Rachel's personal awareness and how she perceives herself through everyone else's opinion of her.

Both male figures influence the audience in seeing all three female characters under a specific light and through this distorted reality the mystery builds up and confuses the audience by making the ending of the film shocking and the perfect closure for all the abused characters.

Along with Rachel, even viewers have that pivotal moment of clarity that helps putting all the pieces of the puzzle together to solve the crime.

All in all, even though the characterisation of the protagonists and some aspects of the directing technique are a bit disappointing, thanks to a brilliant cast and a deep and interesting storyline, The Girl on the Train is a gripping thriller that will leave the audience captivated and glued to the screen until the very end.