The Hitman’s Bodyguard(2017) by Camila Sayers 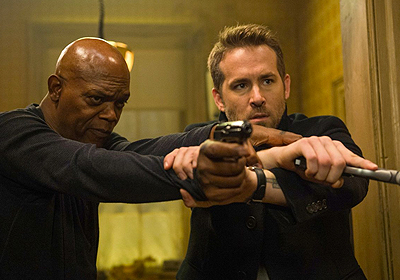 Patrick Hughes’s 'The Hitman's Bodyguard' promises action and comedy and that is exactly what it delivers.

The cast itself is enough to get you giddy, with a medley of Hollywood heavyweights starring - including Ryan Reynolds, Samuel L. Jackson, Salma Hayek and Gary Oldman. The film lends itself to Mr. Reynolds newfound love of dry and juvenile humour, hot from the success of Marvel’s Deadpool. Although, it does seem at times forced with the fast-paced action scenes serving as relief to the multiple gags which repeatedly plaster themselves on screen.

The plot line revolves around one time glorified security professional Michael Bryce’s (Reynolds) journey to find notorious hitman Darius Kincaid (Jackson) to testify against a tyrannical dictator (Oldman). Many archetypical characters included, if you so agree, not to mention Darius’s jail bird wife Sonia, who comes in the form of a sexy, sassy and downright violent Salma Hayek. The R rating comes with no apologies, be warned it can get quite gritty and bloody as times, with the occasional serious political backdrop at the forefront of certain scenes.

I wouldn’t necessarily choose this as my summer film, rather one of the options to choose from. In saying that, it is a buddy action movie which I recall having quite a few laugh out loud moments and just enough tension to keep my attention from waning. The ending testimony and dictator Vladislav’s final fight for his life can border on the obscenely ridiculous in terms of scale and believability, but it can’t be said that director Patrick Hughes is known for a realistic style, having previously given us Expendables 3.

Ryan Reynolds and Samuel L. Jackson’s undeniable charisma and banter is what will transport you easily through this film and save it from becoming just another summer action film, writer Tom O’Connor also contributes to the actually funny dialogue and gags which do involve a lot of Mr. Jackson’s favourite swear word. Any guesses which?