Their Finest(2017) by Tremayne Miller 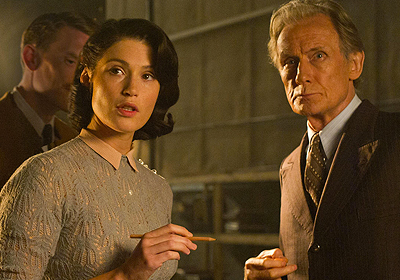 "Scherfig’s take on a wartime London is believable, a of the nit and grit versus the romantic nostalgia"

The film is set at the height of The Blitz in a 1940’s London takes its title from a s Winston Churchill speech, one could quibble it is a film about filmmaking, with an emphasis placed on raising morale.

It features a courageous proto-feminist heroine, and a rather jaded love interest, Lone Scherfig takes a more commercial based course of direction from 2011’s “One Day” and “An Education,” in this pleasing romantic comedy, not too dissimilar to Richard Curtis, and Bill Nighy steels many a scene, as was also the case in Love Actually.

Arterton plays Catrin, a capable, yet under confident Welsh girl who’s living hand-to-mouth in London. A secretarial application to the British Ministry of Information sees its supervisor (Richard E. Grant) hire her in as a Writer of “slop” for the film division. “Slop” being code for propaganda shorts which ran between feature films at the cinema.

Although she finds the work to be near to soul destroying, she needs the money, especially when her artist husband Ellis Cole (Jack Huston) fails to reap in a profit from any of his paintings.

One day she is sent to the coast to interview twin sisters who were meant to have ferried across soldiers during the expulsion of Dunkirk. Once there, however, it seems she has hit a brick wall but perhaps something can be salvaged out of a film script. Their story had, as it happens been greatly enhanced.

With the objective to turn over movies, containing “authenticity informed by optimism,” the Ministry give the go ahead for the Dunkirk film.  Catrin will help write it but to do so, she is paired off with Sam Claflin, a producer, who holds little hope that the film will be a success.

Catrin’s motivation is spurred on by her male colleagues but it is only a matter of time before the script takes a different course of direction, and it becomes all the more fictionalised.

Now at the point of Casting, we are introduced to Ambrose Hilliard (Bill Nighy), a rather egotistical, conceited actor, whose career appears to be an end. Begrudgingly he agrees to take on a role in Catrin’s film, although throughout it he tries to reason with her to revise the story line. This is familiar casting for Nighy but he never fails to disappoint me.

Arterton’s role as Rosalind Russell sees her coming to life as she gains more confidence, and Buckley (Sam Claflin) can but regard her as his intellectual equal. His looks are undeterminable, hidden behind the glasses he wears, with a slight receding hairline, yet the performance he delivers is respectable.

The film serves humour throughout, including from Helen McCrory, Ambrose’s new agent, talentless American actor, Jack Lacy, who’s been reeled into the project for diplomatic purposes and government, Jeremy Irons, whose delivery of “Henry V’s” St. Crispin’s Day speech is quite something.

Some plot threads appear to disintegrate all too easily. Nonetheless, Scherfig’s take on a wartime London is believable, a of the nit and grit versus the romantic nostalgia.

A ‘dramedy’ that forms a relatively novel approach towards the WWII-era, using a sufficient of humour, carefully navigated by its screenwriter, Gaby Chiappe.

Yes, as the bombs doth fall, Catrin, Buckley and her crew work madly away at producing a film which will help bring about the sunshine to the nation, at the same time we learn the importance camaraderie, laughter and passion.