Trespass Against Us(2017) by Anne-Sophie Marie (#ActingHour) 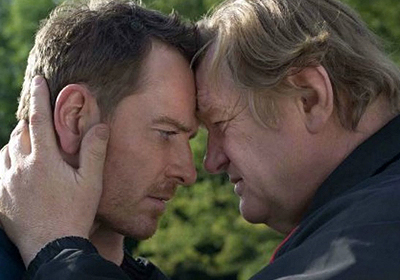 "writing more about it would probably hinder the experience of watching it with too many spoilers, so I’d rather not cover more aspects"

Set in the wealthy English countryside, Adam Smith’s feature film debut centres around Chad Cutler (Michael Fassbender), an illiterate father of two, as he attempts to set up a better life for his family, away from the gang of Irish travellers led by his imperious criminal father, Colby (Brendan Gleeson).

From the very first (exhilarating) shot, we get a clear sense of the genre: not a classic gangster film, but a gritty British family drama which happens to be set among outlaws. We’re also immediately introduced to Chad’s son Tyson (Georgie Smith), around whom the story also revolves, as the entire crew seems to be giving the boy his first driving lesson, frantically chasing a rabbit through a field.

Driving and animals are paramount to the film and two defining elements for Chad, who operates as the driver for Colby’s heists and shows a particular bond to animals of all kinds. (This fondness for animals, and the camping site itself, leads to gorgeous shots of the countryside and its derelict sides throughout.)

Influenced by wife Kelly (Lyndsey Marshal), Chad seeks to move into a house and leave the family business. But when Colby, whose obscurantist beliefs are already a hindrance to his grandchildren’s schooling, catches wind of the plan, he does what is necessary to prevent Chad from flying the coop.

The screenplay, Alisdair Siddons’ very first, has a dynamic rhythm and a fairly clear plot. However, while some characters’ relationships really come to life, others, including Colby and Chad’s, feel at times a little nebulous. In a similar manner, Gordy’s place among the Cutlers doesn’t really have much of a narrative impact until the third act, thus making Sean Harris’s lovely performance as the gang’s oddball a little wasted at times.

Chad’s relationship with Kelly, flawlessly played by Marshal, is on the other hand completely believable and anchored to the story. Fassbender’s best onscreen chemistry in the film is however with Rory Kinnear, who plays P.C. Lovage, a policeman who seems to have been after the Cutler's for quite some time.

From his very first appearance, Kinnear fuels the screen with the kind of tension any crime film requires. In addition, scenes between the two actors have an energy that makes each move completely unpredictable. As performers they seem to bring the best out of each other.

Another wonderful ingredient are the car chases, which (of course) plays an important part. The first one created a very dynamic opening; later, a car stint made as a protest creates a playful cop and thieves sequence. The main heist also leads to a very good chase with a hilarious gas station stop, and later a gripping manhunt with a few particularly memorable points of interest. Again, without spoilers, the final sequence delivers in this department, setting up a surprisingly bittersweet closure to Chad’s family story.

Due to the nature of the movie, writing more about it would probably hinder the experience of watching it with too many spoilers, so I’d rather not cover more aspects. Instead, I'll conclude that though the film might have benefitted from a little fine tuning regarding some of the dynamics at play and character development, this is nonetheless a highly entertaining ride, with a lively score by The Chemical Brothers. And, last but not least, it's beautifully shot by Eduard Grau who, after his fantastic work on The Gift and A Single Man, is now someone I will definitely look out for.