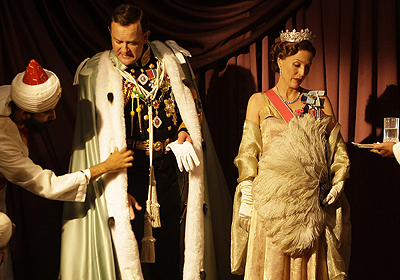 "skilfully put together like a handmade pashmina - a work of love, at the same time providing a realistic, and raw account of the extent to which India's heart was hacked into"

Viceroy's House directed by Gurinder Chadha and written by Paul Mayeda Berges, Moira Buffini and Chadha tells the tale of the inside life of the Viceroy’s House in 1947 during the Partition of India. It stars Hugh Bonneville, Gillian Anderson, Manish Dyal, Huma Qureshi, Michael Gambon, and Simon Callow.

After three centuries in India, the British announced that they would be leaving, and in new film Viceroy’s House it claims that Mountbatten was used as a pawn, manipulated by Winston Churchill, as part of a plan that was drawn up years before.

It is thought the Government wished to splice up India in order to have their say over the key port of Karachi in Pakistan and to prevent the Soviet Union from expanding into Asia. But to split the country into Hindu India and Muslim Pakistan resulted in millions being stranded, and has been recorded as the largest migration to ever occur in history.

Director Gurinder Chadha says of Mountbatten (Hugh Bonneville) that “he was a naval officer .. used to following orders and not really (questioning) what he was doing. He was out of his depth.”

Gillian Anderson completely immerses herself in the role of Edwina Mountbatten, capturing the right tone in spirit, where parallels can be drawn between the two women. Lady Edwina Mountbatten for her forward-thinking politics and strength of character, and Anderson, an activist for equality, particularly for women.

She is a long-time supporter of the Feminist Majority Foundation, and works with Eve Ensler’s V-Day movement, that aims to end violence against women and girls.

Meticulous attention to detail is shown, from the original footage - bloody riots and speeches, to the historical portrayals made by cast members, an example of which is Simon Callow as Cyril Radcliffe, who exclaims the absurdities behind drawing a line through the pulsating heart of the country.

But as the political upheaval unveils, so does the love story between Jeet (Manish Dayal) and Aalia  (Huma Qureshi) , who themselves come from different communities. We get a real sense of the era through the actors but particularly through Dayal. The love between he and Qureshi works like a human lens amidst the animosity.

Gurinder wanted to make this film because of her family actually having been there and experiencing the horror firsthand, which lends the film its unique perspective and beating heart.

Om Puri (OBE), who plays Aalia’s father sadly died from a heart attack on 6 January 2017, (aged 66). Born 18 October 1950 to a Punjabi family in Ambala, although his family were not certain as to the date and year of his birth, however his mother told him he was born two days after the Hindu festival Dussehra.

He appeared in mainstream commercial Indian films, as well as independent ones. Best known for his roles in Aakrosh (1980), Arohan (1982) and telefilms like Sadgati (1981) and Tamas (1987). Puri also had a minuscule role in the Oscar winning movie ‘Gandhi’, which changed the lives of everybody who was associated with it.

Although he barely had one-and-a-half-minutes on screen, the impact his cameo had lead to it being featured during the Oscar nominations. ‘Ghandi’ changed the image that India had abroad, before which a vast majority of the Western world knew not of their values, culture or ethics, along with their struggles and triumphs as a nation.
Puri played a man who’d lost his son, and the scene he was in became a pivotal point in the well written narrative.
The film’s objective was to highlight the humanism of Gandhi, whilst focusing in on the non-violent freedom struggle of the Mahatama. Netaji Subhas was deliberately not featured. If he had been, then it’s likely that the film would not have carried the political message it did

With Viceroy’s House the 70-year anniversary of the partition this summer, religious extremism both then and now has never felt so pertinent. Viceroy’s House was well scripted, acted and educational, with an interwoven love story leading me to shed a tear or two.

The film was skilfully put together like a handmade pashmina - a work of love, at the same time providing a realistic, and raw account of the extent to which India's heart was hacked into.