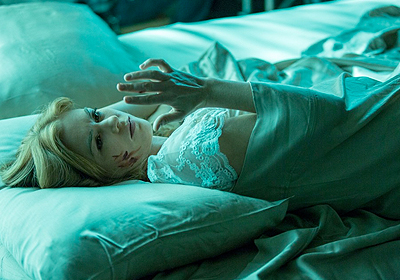 Kevin Greutert is mostly known for directing the last two chapters of the Saw franchise. Deciding to stick to the horror genre, he directed Jessabelle in 2014 and his fourth feature film, Visions, in 2015. Starring Isla Fisher as Eveleigh Maddox, a pregnant woman suffering from post-traumatic stress disorder, Visions begins by showing a car accident Eveleigh was involved in. It then fast forwards to a year later, when she moves with her husband (Anson Mount) to an isolated house in a lovely vineyard. What follows is an undefined number of clichés; ominous clues that suggest to the audience, in case someone was still wondering, is that Visions is yet another haunted house film.

Eveleigh soon starts having nightmares, then seeing things, but of course no one takes her seriously when she starts feeling threatened by her visions. It’s probably just the pregnancy, plus she just got off antidepressants. As she keeps being tormented by inanimate objects moving, bloody handprints and a mysterious hooded figure, she decides to investigate to find out if something horrible happened in her vineyard. Despite the threatening atmosphere, Visions fails to come across as an engaging psychological thriller. For the first hour or so, the truly terrifying and nerve wracking things are the embarrassingly trivial dialogues.

But the major flaw is the superficiality with which most elements are dealt with, probably to try and keep a sense of mystery around the vineyard and the locals. Not much time is spent analysing and developing the personalities of the people that surround Eveleigh, making characters like her best friend Eileen (Eva Longoria) utterly unnecessary. Even a vaguely interesting figure such as Helena (Joanna Cassidy), an important wine critic with a cold facade, who hides a terrifying secret, manages to get labeled as incredibly useless.

Most of the main character’s concerns about the people who inhabit the vineyard are left unsolved, leaving room for frustration and confusion. However, the ambition with which Visions tries to include as many elements as possible in a surprisingly short runtime is somehow noteworthy; the story builds up on commonplaces and unsolved mysteries, leaving the audience wondering where exactly these are going to lead.

But the denouement is surprisingly gratifying, the last twenty minutes of the film nicely give an original twist to the otherwise forgettable story. Although this can’t possibly be enough to save Visions from its mediocrity, it provides a good reason to at least try and watch the film. With nice visuals, good special effects, a decent soundtrack and average acting, it doesn’t exactly stand out as either a complete disaster or an unmissable watch, but proves that Greutert has what it takes to step it up. Overall, it could be enjoyable for both people unfamiliar with the horror genre and die hard horror fans looking for a brief easy watch.