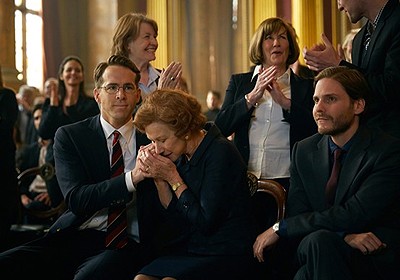 "The casting here is amazing, Mirren and Reynolds work incredibly well together"

Woman in Gold is the latest offering from filmmaker Simon Curtis. Set in L.A and Vienna, this is the extraordinary true story of Maria Altmann who fled from Vienna in World War II during the Nazi occupation, she left behind her family and the beloved portrait of her aunt - The Woman in Gold.

The film follows the elderly Altmann as she attempts to get back what is rightfully hers in a landmark Restitution case that sees Altmann, played by national treasure Dame Helen Mirren, with her lawyer, Randy Schoenberg (Ryan Reynolds), seeking justice.

The film is beautiful, using a gold hue to depict the good times the young Maria (Tatiana Maslany) shared with her family, this is in contrast to the black and white-esque desaturated hue showing the past; the grim past, as they attempt to stay alive during the Nazi occupation, which is all juxtaposed against a bright, modern day L.A.

The casting here is amazing, Mirren and Reynolds work incredibly well together. They are the odd couple, sure, but they work. Similarly, Maslany is fantastic as the young Altmann. Holding her own with Mirren is no small feat, and I believe this good Canadian kid will no doubt go far, but they never share screen time together -- it’s clear that Maslany learnt a lot from Mirren. Daniel Brühl is nothing short of brilliant too; the guy is a phenomenal talent and is just a joy to watch when he’s on-screen.

I must admit that I knew nothing about the Restitution case or the painting that the story revolves around, and unlike other films of this ilk there are two opposing sides after the same thing, with conflicting wants. I’m glad that the obvious tropes were avoided in favour of telling a compelling and complete story.

All in all, Woman in Gold is a well paced, superbly acted film that will keep you engaged from start to finish: not only with the dazzling visuals, but the stellar cast that Curtis and his creative team assembled is almost perfect. I’m genuinely looking forward to seeing what he does next.