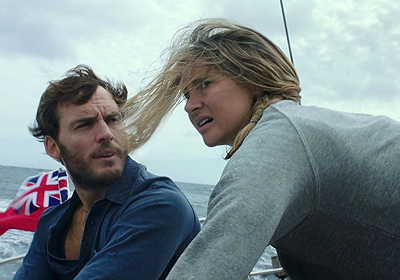 "proves to be an inspirational account of one woman’s heroism, strength of character and spirit"

Few forces on Earth are more powerful or life threatening than a Category 4 Hurricane, the typical energy of which can be the equivalent to more than 10,000 nuclear bombs being discharged over a lifetime.

Yet in September 1983 Tami Oldham and Richard Sharp, two experienced seafarers were met by one, Hurricane Raymond, after having set sail as part of a delivery passage on a 44-foot yacht from Tahiti to San Diego.

Shailene Woodley brings a unique performance to the screen, and is the reason for this film being kept afloat, where some members of the audience might have otherwise drifted away. Woodley and Sam Claflin prove an excellent pairing, with such natural on-screen chemistry.

“The story was so rich and had so much depth to its truth,” says Woodley of her role. “I wanted to make sure we were honestly depicting what happened.” The Hazana was battered by 40-foot waves. The next six weeks at sea proved arduous, and Tami managed to assemble a makeshift sail whilst experiencing hallucinations.

No one could have predicted the scale of the Hurricane they sailed into; in the film, after the storm, Tami rose to find Richard badly injured and the vessel in tatters. With little chance of being rescued, Tami finds the strength within to steer herself and her love to safety.

The love Baltaser Kormakur has for the sea and Mother Nature herself, having professionally competed as a sailor when he was young, definitely shines through.  And the intricate cinematography of Robert Richardson mean that each section of this film is coiled out beautifully. In fact, the treatment made to the story is nothing short of phenomenal, on a level of realism.

Music in the film was by Academy Award-nominated composer Hauschka, who composed the original score. It is included in the soundtrack, as well as a cover of Tom Waits’s "I Hope That I Don't Fall In Love With You" by Emiliana Torrini.

Adrift proves to be an inspirational account of one woman’s heroism, strength of character and spirit, whose love meant she never surrendered, no matter the obstacles that lay before her.  Hurricane Raymond today remains one of the most disastrous storms ever in history.