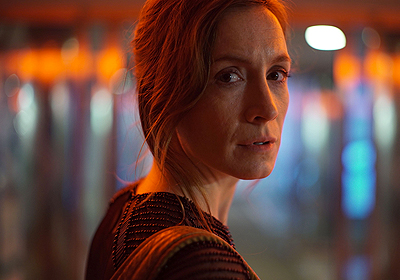 From Silent Running to Interstellar, the idea of humanity reaching into outer space to save themselves from a dying planet is nothing new in cinema and it’s climate change that gives ambitious Swedish production Aniara its starting point.

The film opens with real-life footage of natural disasters before some ingenious opening credits which takes the simple idea of the closing scrawl at the start. It’s the end in more ways than one.

As a group of humans make their way up to the transport ship of the title, we learn that it should take them a few weeks to travel to their new home on Mars. Yet when the ship has to make a drastic manoeuvre to avoid a collision, it’s knocked off course and a trip of a month turns into years and years and years…

Subsequently the passengers and crew are forced to survive and while the ship can provide for them, it's at this point a search for a utopia becomes quite the opposite as whilst they learn you can’t run away from the behaviour of mankind when that is what you are.

There are a lot of ideas packed into the running time with elements of horror creeping in to what sets itself up to be a science-fiction film, where a smart idea sometimes descends into the realm of the bizarre.

That’s not to say its scope and themes aren’t smart and thought-provoking and the final image is a potent one, yet a more stripped down approach may well have been beneficial.