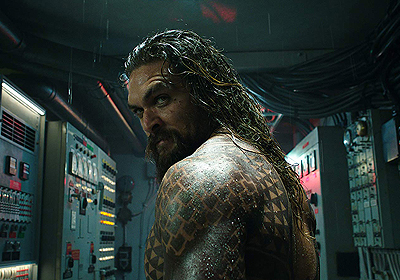 "Watching it in IMAX was impressive, the scope of the film in that format made it an experience and in 3D you did feel you were underwater and immersed in the world"

Aquaman is one of the best of the current DC movies. It’s up there with Wonder Woman. The scenes underneath the seas are stunning with a beautiful realisation of the world from the Comics. The underwater battles in their epic scale, I would liken to the Lord of the Rings trilogy.

Jason Momoa has made Aquaman his own, with a great command of the screen, the rest of the cast was great and the film has good world building and explained a lot of the Aquaman mythos from DC Comics lore. It’s a great Arthurian quest and the roof top fight sequence set it in Italy, the cinematography is impressive. Hopefully, WB will learn from this with following DC films. Great fun in the cinema!

Amber Heard’s Mera was a great heroine and the banter/flirtation between her and Momoa’s Arthur was entertaining. She shows her comedic charm and is not the damsel in distress and is a strong guiding light and lead when encouraging Arthur to become the hero he is destined to be.

Patrick Wilson made a great villain as King Orm aka Ocean Master in the DC Universe and is definitely one of the better ones with the reasons for his villainy being understandable, however his methods are another matter...

Yahya Abdul-Mateen II was underused as Black Manta in this film, cool secondary antagonist, but could have been used more in this film but (spoilers) might be used more in the sequel. He was terrific during the roof top fight sequence and his costume was comicbook accurate and didn’t look silly but functional and their are plausible reasons why he has such a big helmet.

Willem Dafoe, returns to world of comic book movies as Valko; he is the military advisor to Atlantis, the “Merlin” to Arthur Curry aka Aquaman; teaching him how to swim and use his powers when he was growing up and teaching the history of Atlantis. He brings gravitas to role.

Nicole Kidman show both grace and feistiness in the role of Atlanna, Arthur’s mother and Temuera Morrison as Arthur’s dad, Thomas, brings humour and a great father figure to the film. The love story between the two characters is one of the strengths of the film.

Watching it in IMAX was impressive, the scope of the film in that format made it an experience and in 3D you did feel you were underwater and immersed in the world.

One note: I did feel the strain on my eyes at times. However, it didn’t ruin my enjoyment of the film!