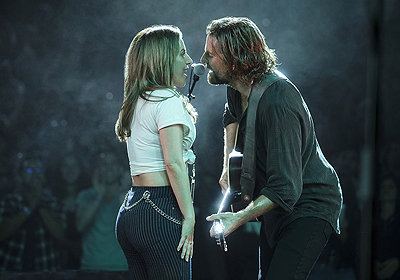 Lady Gaga shines in Cooper's directorial debut as underdog and soon to be star Ally. Cooper double dips as director and co-lead, playing past his prime rock legend Jackson Maine.

The film sets the tone before you even see the first shot, with bass rumbling through every fibre of the audience. Then Jackson lets loose with one of his songs, playing to what looks like a sold out stadium. Cooper comes across as a genuine rockstar, a rockstar on a constant quest for liquor. One of these brings him to a dive bar with a drag queen show, where he sees HER! Jackson, like the audience, is immediately smitten with her; her performance and especially her voice.

Just in case she hasn't wowed you enough already we get to hear Lady Gaga sing A cappella in a parking lot in the middle of the night. Their fates are sealed and Ally is introduced at his next gig, where she reluctantly steps up to the mic and just goes for it - and when she belts out that voice in ways you hardly ever hear Gaga sing it's like a spiritual awakening. I got goosebumps and tears in my eyes. Such a powerful voice it electrified the screen and the entire audience. I was full on emotional and from there Gaga and the film just keep going and you're with her all the way.

As Ally's star begins to rise she has to fight to keep true to herself and not be overshadowed by her new pop persona. Some of that rang true and personal given Gaga's career and history. Yet once the film deteriorates into melodrama, Gaga still manages to mesmerise with a natural and authentic performance. Subtle and nuanced she carries the entire film with grace and style. A captivating leading lady in what will most likely be a career changing performance.

Cooper managed to structure an emotional and entertaining narrative around Lady Gaga's performance. As Jackson's career dies down and he's about to become a background player with Ally's star ever on the rise he can't help but fight her for the limelight in rather embarrassing scenes. So too it felt with Cooper as Jackson, who should have passed the torch and taken a step back. But while all we want to see is more of Lady Gaga's intriguing Ally, Cooper keeps pushing the attention to Jackson. This and the ramped up melodrama in its second half do a disservice to an otherwise well crafted film.

The supporting cast is solid with special mentions to the always charming Sam Elliott as Jackson's brother, who clearly influenced Cooper's idea for Jackson's deep, husky voice, as well as Andrew Dice Clay who steals several scenes as Ally's dad and helped make Ally such a relatable and grounded character.

A Star Is Born feels like a Lady Gaga album made into a movie. Cooper wrapped the well known plot nicely around his star and her music without ever treading new ground. If not for the engaging performances and the powerful music this iteration would just be another in a long line of remakes. Make sure you watch this in the cinema as the audio alone will make it worth your while.

We came to see Lady Gaga the performer, fell in love with Lady Gaga the actress, and leave wanting to see more of this brilliant leading lady. I defy anyone walking out of the cinema not to be enamoured with her. I wasn't much of a fan but sure am after seeing her marvellous performance. Lady Gaga the actress is on my list of people who I have to see no matter the project. Magnificent!