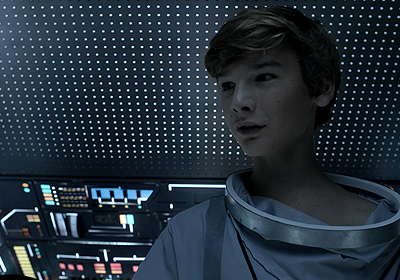 "The childhood idea of wonder, imagination, escapism, a desire to explore and first love is told through the fractured glasses of a troubled boy"

While Damian Chazelle’s big-budget Neil Armstrong biopic First Man might initially seem to be a world away from this independent Argentinian coming of age drama, the two films not only share an oddly similar plot, but a thematic DNA.

Opening with a shot of an abandoned swimming pool, we meet our main protagonist Tomas (Angelo Mitti Spinetta). He is a young and somewhat isolated boy, not exactly a loner but troubled by an event in his past that we see but is never spoken about. As Tomas and his friend use the aforementioned pool as a cycle track, it’s clear that imagination and creativity are a key factor in their troubled lives.

The moon meanwhile, exists as an ever-present, hanging over the skyline of the city in which Tomas lives, showing up on television and featuring in a magazine in his bedroom. His fascination with the celestial body leads him to gaze longingly at it from his room, from where he spots his neighbour Iris (Angela Torres), upon whom he develops something of a crush to the irritation of her boyfriend.

The childhood idea of wonder, imagination, escapism, a desire to explore and first love is told through the fractured glasses of a troubled boy, as director Joaquin Cambre explores oft-explored themes in a new way, emphasised with subtle humorous beats.

The films pondering nature does have something of a toll on the pacing come the mid-point, before a third act switch to a world of pure imagination. We escape our reality for a while and enter that of Tomas. Some of the charm is initially lost thanks to the film’s darker elements but this leads into a superbly edited breakdown which fuses the reality with the imagined. As all hope might seem lost, Cambre leads us to a climax which gives Tomas both his desired resolution and path to a better future.

Ending on a perfectly uplifting grace note that works in a way that is life-affirmingly endearing, A Trip To The Moon is a moving journey worth taking.