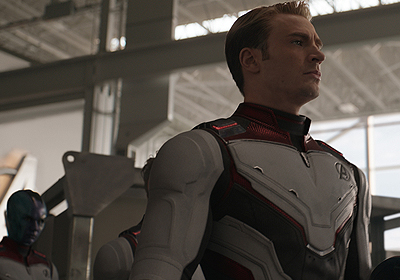 Directed by Joe and Anthony Russo, Avengers: Endgame is the epic conclusion to the twenty-two film Infinity Saga story arc, and it doesn’t miss a beat, packed full of action, humour and heart, it is the ending Cinema goers have been wanting and waiting for.

Picking up in the moments leading up to the grave event of Infinity War’s Snap, we witness the devastating event that causes Hawkeye to take on the guise of Ronin, and then picks up with the remaining Avengers in their compound with the inclusion of Brie Larson’s Captain Marvel as they decide to embark on a mission to confront Josh Brolin’s Thanos to get the Infinity Stones to put things right.

After the encounter, it flashes to five years later, where the Avengers are still trying to pick up the pieces from the devastating events of the Snap and Jeremy Renner’s Ronin is embarking on his own mission whilst evading the Avengers, now led, it appears by Scarlett Johansson’s Black Widow.

When Ant-Man (Paul Rudd) is pulled out of the Quantum Realm with some unlikely assistance, the Avengers embark on another mission to assemble a new Guantlet to put things right, with the assistance of a reluctant Tony Stark, who has seemingly retired from the Superhero life, and has settled down with Gwyneth Paltrow's Pepper Potts and their young daughter Morgan Stark (Lexi Rabe).

What follows is somewhat of a stroll down memory lane as the Avengers, who have been split into teams go to different points in the MCU timeline to collect the stones, culminating in an epic battle with Thanos and his forces.

Packed full of twists and turns and some welcomed cameos, Avengers: Endgame is the perfect ending to the Infinity Saga, that kicked off with 2008’s Iron Man, it looks and sounds stunning in IMAX, utilising the technology that it was shot in in its entirety, and on the topic of sound, the score from returning MCU Composer Alan Silvestri is incredible, giving gravitas and weight to the film.

Across the board, the acting is great, especially from Robert Downey Jr., Chris Evans, Scarlett Johansson, Mark Ruffalo, Don Cheadle, Karen Gillan and the aforementioned Renner and Rudd, they all know their characters and each have fitting story arcs to their characters, packed full of fan service which sticks the landing every time, and gives us things we have wanted to see from the beginning, Avengers: Endgame is a triumph and the shining beacon of what comic book inspired movies should be.

Cleverly written by Stephen McFeely and Christopher Markus, there is a lot to unpack in Avengers: Endgame and it sticks to its rules of using time travel and gives everyone their time to shine, paying off a lot of things that were set up as far back as the aforementioned Iron Man.

Whilst it does answer a lot of questions, it does ask some brand new ones, so with that in mind, the future of the MCU looks bright, and I can’t wait to see what comes next.