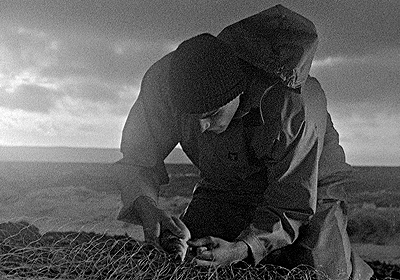 "Bait is nothing short of brilliant. Jenkin is a jack of all trades and a master of them too"

With its black and white photography, 16mm kodak film stock, cast of unknowns and low budget aesthetic, watching Bait feels like going through the unknown back catalogue of a well-known and since well-established auteur of filmmaking. It’s akin to the experience a film student might feel watching Scorsese’s Mean Streets, the Coen’s Blood Simple or Christopher Nolan’s Following wherein through it all the raw brilliance of the talent behind the camera seeps through, paving a way for more great things to come.

The thing is that Bait is no film from a by-gone era, but the 2019 feature from the supremely talented Mark Jenkin who serves as writer, director, director of photography and editor. It would be wrong to call the film his debut, but the plethora of five-star reviews and awards will hopefully propel Jenkin to bigger things. I stop short of saying ‘better’ because, watching Bait, it’s hard to see how such an act is possible.

Set in a Cornish fishing village, the story follows fisherman Martin (Edward Rowe), a character from yesteryear. While his former accomplices have sought employment driving taxis or taking stag parties on coastal tours and his house has been sold to the tourist industry, Martin clings to local industry, trying to make ends meet selling fish in order to raise enough money to buy his own boat.

Martin sits at odds with the new community, having seen his world changed by outsiders and their money who come in uninvited and then preach to the locals about laws and regulations.

The metaphors are plentiful – austerity, culture clashes, tradition, nostalgia and making an honest living are all wrapped up in a plot that also examines family, grief and potentially a slimmer of hope.

Bait is nothing short of brilliant. Jenkin is a jack of all trades and a master of them too. At the films base is a script with genuine heart and warmth and more than a slight nod of humour while the direction is tight and the editing something to behold. An early scene in the local pub sublimely intercuts two separate conversations – one about Martin’s life and past and the other involving an argument over a game of pool (a recurring motif) – both of which manage to filter into the overarching narrative. In the self-same setting later on, Jenkin intercuts what one might expect to be a barroom brawl with a couple making dinner with the frequent use of match cuts ingeniously demonstrating the opposite end of the spectrum upon which the respective characters reside.

Do believe the hype and hopefully one day we will look back at Bait as the early work of a director with an established body of work.