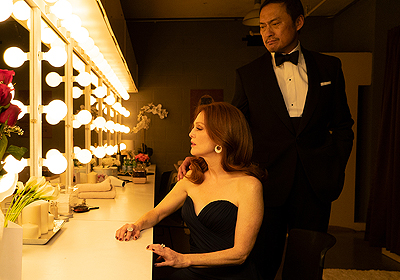 "For all its faults, however, Bel Canto offers us an engaging story, replete with memorable moments of deftness and humanity"

Set against the backdrop of Lima’s Japanese embassy hostage crisis of 1996-7, Bel Canto is a confusing concoction. Based on the novel of the same name by Ann Pratchett, more than once it falls victim to the adage that one can make a good film out of a bad book, but not necessarily out of a good one.

It’s an intriguing enough premise, but this uneven adaptation takes a long time to work out what sort of film it’s trying to be, jack-knifing from searingly gritty to almost cloyingly saccharine, and relying on intrusive music to cover up any incongruity and inform us what we ought to be feeling at any given point. It might be possible to overlook this were it not for the fact that Julianne Moore, playing arguably the film’s central figure in operatic soprano Roxanne Coss, is clearly lip-syncing, and far too little has been done to convince us otherwise. One could dismiss this as a small gripe, but when the title of the film is an allusion to this character’s voice, when so much has been made of Moore’s preparation for embodying the role of the famous singer, and when director Paul Weitz insists on lingering on her (at times) blatantly unsynchronised performance for longer than it can bear the weight of our scrutiny, it is so bathetic as to undermine almost the entirety of the rest of the piece. More than once I wondered if this was a comedy in deep cover.

That’s not to say there isn’t fine work on display here. Once the film has waded through its unfocused first act and the stilted dialogue has given way to meatier fare, an engrossing story begins to emerge from the woodwork. There’s a roster of valiant supporting performances, particularly from Sebastian Koch as a hard-bitten and world-weary Red Cross worker and Tenoch Huerta as Comandante Benjamin, who as the crisis drags into days, and eventually weeks, plays the hopelessness of his situation with an air of quietly tragic resignation.

There are also achingly beautiful moments peppered throughout, presented without fanfare, that seem to brilliantly capture the strange interplay of light and dark that must characterise situations such as these. After being allowed outside for the first time in weeks, two silver-haired hostages run giddily about a sunlit garden. “They look like children,” remarks the Comandante. “What does that make you,” asks a fellow insurgent, “their mother?”

Against the odds, one leaves this undeniably patchy curio with a genuine lump in the throat. It hits its emotional beats so stealthily that when the inevitable conclusion plays out, you find yourself mourning characters in whom you weren’t even aware you were invested, and we are treated to a masterfully queasy sequence detailing the juxtaposition of how the world at large views the end of the hostage crisis, versus how the characters themselves feel having lived through it. A starker contrast you’d be hard-pushed to find.

Good things cannot last, however, and Weitz hubristically returns us to the unintentionally hilarious spectacle of Moore, ordinarily so pitch-perfect, failing to convince us of her operatic pipes. For an actor of Moore’s calibre, it’s nothing short of baffling. She also has the ignominy of dealing with much of the clunkier dialogue, which she does with very little of her usual flare, all of which leads to the frustrating conclusion that both the script and the musical sequences could have done with some fairly brutal cutting, as what had the potential to be an absolutely sterling piece of drama now feels more like an occasionally interesting dud. For all its faults, however, Bel Canto offers us an engaging story, replete with memorable moments of deftness and humanity, and uncomfortable reminders that the tussles between good and evil presented to us in the news are wont to be misleading, and that much as we might wish otherwise, nothing is ever black and white.