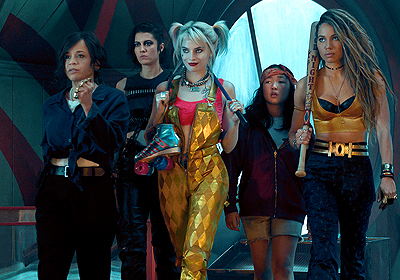 "the future of DC film adaptations is bright, as long as Warner Bros. trust in the talent that they hire to make the films"

It's fair to say that adapting DC properties has been a mixed bag; the "sure things" like Man of Steel and Batman V Superman: Dawn of Justice, were met with mixed receptions whilst the properties like Wonder Woman and Shazam! that are regarded as "risky" were better recieved, but the studio took a hands off approach to them leaving the filmmakers to make the film that they envisioned, and then there are the god awful and well documented choices made in Justice League.

Which brings us to the first DC adaptation of 2020; Birds of Prey: And the Fantabulous Emancipation of One Harley Quinn, and let's be clear whilst it is an adaptation, it is also it's own thing since the titular character; Harley Quinn (Margot Robbie) was not a member of the Birds of Prey from the comics, which is well documented, Robbie herself has addressed it. To be honest though, it doesn't matter, since I have always said why would you want to watch what you have already read, she was a member of the Gotham City Sirens, but that was more of a supervillainess team up series.

The other thing that should be noted, and you'll get this impression from watching the trailers, is that this film is definitely a successor to Suicide Squad with the peppering of flash backs to events shown; it's definitely better than Suicide Squad, it's more vibrant in the colour pallett used and leans into the comic book origins in a lighthearted and grounded way, whilst also being outlandish and larger than life from the get go; thing is, it knows what it wants to be and leans into it.

So we are reintroduced to Harley Quinn, played marvelously by the aforementioned Robbie, she knows the character and revels in making Harley her own, she's wonderful to watch from start to finish, taking us on her journey to carve our her own identy away from the Joker; even if she is an unreliable narrator, she's incredible. The other stand out to me was Mary Elizabeth Winstead as Helena Bertinelli aka The Huntress, I've always liked her work and enjoy seeing her take to a type of role that I haven't seen her in before. Also, seeing a different side to Ewan McGregor as Roman Sionis aka Black Mask, is refreshing, he leans into the sadistic and villainous nature of the character, he's wonderful in the role.

Directed by DC newcomer Cathy Yan and written by the incredible Christina Hodson, Birds of Prey And The Fantabulous Emancipation Of One Harley Quinn is a bright, colourful and fast paced film that is entertaining from start to finish, backed by incredible stuntwork and a wonderful soundtrack that accents the film and the action without distracting from it.

Yan doesn't have a tonne of experience, but I think with how good Birds of Prey And The Fantabulous Emancipation Of One Harley Quinn is, the future of DC film adaptations is bright, as long as Warner Bros. trust in the talent that they hire to make the films, since too many cooks spoil the broth, and that is all too true in regards to DC adaptations.