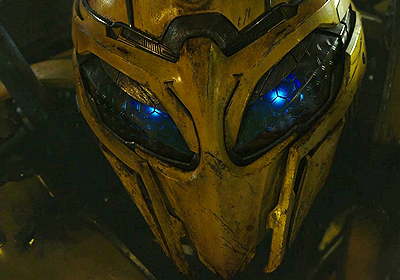 "It's great fun for the whole family, visually stunning and best enjoyed in IMAX if at all possible"

Transformers as a whole has been a difficult franchise to translate from cartoon to live action movie. Michael Bay tried to do this with mixed results, producing initially entertaining entries but ultimately appearing to run out of ideas to the annoyance of long time fans, even more so to "Generation 1" purists who complained since its initial release that Bay had strayed too far from the source material.

So after five main series entries we have Bumblebee, heading into the film we aren't quite sure what to expect. Is it a spin off? is it a soft reboot? or is it a prequel? Well the answer is, it's all 3.. of sorts. The first 15 minutes of this movie are what I can only describe as long time fans wet dream, set on Cyberton seeing the warring Autobot's and Decepticon's realised in their original designs is something utterly mind blowing, it's also arguable the best and most faithful adaption since the 1986 animated film.

From the beginning we can see this is somewhat of a different beast than the previous entries, it's also a love letter to many 80's and 90's classics, sometimes a little to its own detriment. I'll go in-depth with that later, however when discussing the soundtrack it does at times feel like any excuse to shoehorn in another song.

This plot feels somewhat standard fare, albeit with a throwback element. Our main plot is that of Bumblebee coming to Earth after fleeing Cyberton, taking heavy damage, with his memory failing and voice modulator ripped out in the process after a run in with the semi-antagonistic Agent Burns (played by John Cena) and the pursuing Decepticon troops. After a while he's found and repaired by our lead Charlie (played brilliant by Hailee Steinfeld), what follows is a part romance, part action and part coming of age tale. This could at times make the film feel very generic, however it's clear this story was crafted with love and attention, Charlie feels relatable without at any point feeling boring or weak.

As mentioned earlier one of my criticisms of this film is that it tries to do too much. If you're a fan of classic cheesy pop then the soundtrack will be very enjoyable for you, however there's a element of shoehorning tracks in to just be able to say "remember this is a prequel", whilst those responsible could have taken a lesson from Marvel's Guardians of the Galaxy regarding how to use a retro soundtrack perfectly. One great mention though is the inclusion of "The Touch" by Stan Bush, nicely calling back to the previously mentioned animated movie, during a scene that showcases the depths of Charlie.

Another large issue is that whilst we're treat to a visually stunning film, it's never quiet sure where the story fits in; there are obvious attempts shown that this is a prequel to Bay's franchise, however there are a few issues with this namely the retcon of how Bumblebee and the rest of the Autobots arrived on Earth. This leads us to think it's likely being treated as a soft reboot of the franchise allowing other stories and hopefully classic story threads to be told. The above is a relatively minor issue in the grand scheme of things and for the majority, this won't stop you enjoying the film.

To summarise, Bumblebee is a welcome addition to Transformers movie lore and hopefully sets the scene for a more faithful series of films to follow. It's great fun for the whole family, visually stunning and best enjoyed in IMAX if at all possible. Generation 1 fans will be in for a treat, keep a close eye out for Soundwave and Ravage!

It's more than meets the eye...