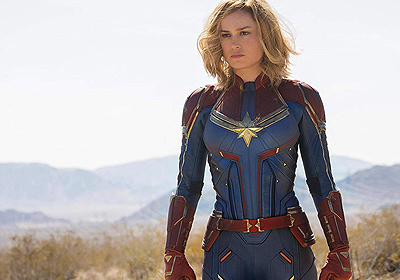 The latest offering from Marvel Studios is a rather special film for a number of reasons; firstly, it is the first female superhero to get her own solo film from the powerhouse studio, giving much needed diversity to the studios set of what is now 21 interconnected films and it is the first MCU film that is led by a woman behind the camera, in the capable form of Anna Boden. The other reasons can be considered spoilers, so I won’t go there.

Set in the mid 90’s, Captain Marvel is far funnier than I expected, that isn’t to say that it is all jokes all of the time, there are serious stakes involved, and it’s not always what you think, just enjoy the ride, it is worth every second of it! There are definite hints to a fish out of water story combined with some vibes from The Terminator as Vers (Brie Larson) discovers who she is, not only with flash backs but during her hero’s journey as a whole. It's a great plot, but to go into more detail would spoil it.

Brie Larson totally embodies the role of Vers aka Carol Danvers aka Captain Marvel, she’s brilliant, combining the strength, sass and cheekiness of the titular character, whilst also giving her a vulnerability in a well rounded, layered character, that just pops on screen.

The support cast around Larson are all great, those returning like Clark Gregg as Agent Coulson and Djimon Hounsou as Korath are great, and show their characters in a simpler time, before the proverbial hit the fan, and in the case of Korath, shows a time before his more villainous time in Guardians of the Galaxy, I’d like to see more about his fall from grace. Lee Pace’s Ronan and Gemma Chan as Minn-Erva are underused, Pace more so than Chan but it would have been nice to see more from them.

Ben Mendelsohn and Jude Law deserve special mention as they just embody their roles of Talos and Yon-Rogg respectively, my theory about the identity of Jude Law wasn’t completely correct, but that’s a spoiler I won’t divulge and Annette Bening is great in everything she’s in, and this is no different, her character is compelling and something I would like to see more of. Lashana Lynch as Maria Rambeau is another stand out giving a very human and sisterly bond to the more outlandish and sci-fi heavy concepts in the film.

At the centre of the film is a sort of buddy cop dynamic between Larson’s Carol and Samuel L. Jackson’s Fury, the de aging on Jackson is incredible, and just goes to show how far the technology has come in recent years.

I haven’t read the comic book series, but I do know they have made some subtle differences to her back story, which I’m fine with as I have always been a proponent of why would you want to watch what you have already read, there has to be adaptation somewhere as a lot of things in comic books don’t necessarily translate well to the big screen, so adaptation must be made for the good of the film and filmmaking duo Anna Boden and Ryan Fleck absolutely nail it!

The soundtrack is amazing, placing well known hits from the 90’s to support an incredible score composed by Pinar Toprak, the songs are well placed, and never used as a crutch. I was fortunate enough to see the film in IMAX, and it is well worth it, the colours are vibrant, the action is clear and the sound is spectacular, so if you get the chance, see it in IMAX.

All in all, Captain Marvel is a wonderful addition to the MCU, as a period piece it manages to connect the dots as well as expand the universe, and with her inevitable inclusion in Avengers: Endgame, the future of the MCU is set and bright. And by now you know to stay through the credits and this film is no exception. I look forward to a sequel with Anna Boden, Ryan Fleck and their creative team as well as Captain Marvel’s continued involvement in the MCU.