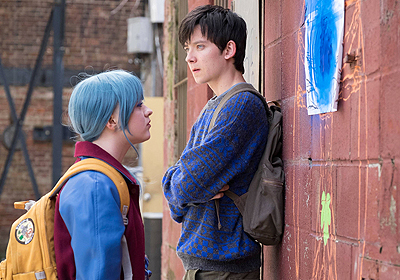 "never fails to be a rather sweet and heart-warming watch"

Life is a fleeting thing that many of us (myself included) take for granted. We live rather modest, perhaps mundane lives with brief flashes of fun and excitement, but mostly we just mosey along at a steady pace. Suppose though, that you told that you don’t have long left to live, what would we do then? What would we do when confronted with our own mortality?

This, admittedly, rather heavy-handed introduction conveniently leads me to the focus of today’s review, the comedy-drama Departures (AKA Then Came You), a rather heart-warming look at what we might do when we find out our lives are coming to an end; we start living it.

Calvin, a young reserved man struggling with hypochondria, befriends the energetic Skye, a young terminally ill teenager, who when faced with her impending death decides its time to start living her life to it’s fullest while also helping her new friend come out of his shell.

Key to why the film works is the leading duo of Asa Butterfield and Maisie Williams as Calvin and Skye respectively, two unlikely friends trying in their own special way to help each other enjoy life.

Butterfield is especially great in his role of Calvin, with the actor brilliantly portraying the characters neurotic personality in an effective fashion, while also knowing when to show restraint so as to not let it veer into overkill. It also helps that Butterfield excels at making you simply like him, with his often nervous energy making Calvin a sympathetic, funny and often relatable character that you can’t help but root for.

Williams also gives a great performance as Skye, with the actress managing to dive into the role with a warm sense of humour and almost boundless energy that quickly becomes infectious. While her character does start off with a bit of the dreaded “Manic Pixie Dream Girl” trope about her, Williams manages to cast off the trope as the film progresses and we begin to understand and sympathise with the plight of her character.

The chemistry between Butterfield and Williams is also on point, with the two making for an effective comic pairing with the two being so damn charming and likeable that it's overpowering, with their back and forth banter is quirky, funny and just a little bit mischievous at times.

The supporting cast of Nina Dobrev, Ken Jeong and Tituss Burgess among them are solid throughout, Jeong especially gets some nice comic moments as a sympathetic local cop, although they disappointingly (especially with regards to Dobrev’s character) don’t quite get the luxury of time to develop their characters too deeply.   Despite the charm of the cast, it’s the story where the film starts to lose points, with it hitting a lot of familiar beats and ending in pretty much the exact way you’d expect it to. The story is also a tad haphazard at times in the way that it throws in revelations about the characters (such as a dead sister being clumsily brought up over an hour in) or in setting up possible plot points that lead nowhere (such as suggestions about Skye’s seeming estrangement from her best friend). The story also veers dangerously close into overly sentimental territory towards the end as the tone becomes more serious, but Williams and Butterfield’s humorous interactions manage to stop things from becoming too sombre.

However, despite the clichéd story I still found myself invested in it because I simply liked the characters. The film also gains some points back for avoiding one particular cliché in that Calvin and Skye’s relationship never becomes romantic, with the two encouraging (and even helping) each other to pursue their own love interests. And even if the story is unoriginal, it’s benefited by the fact that its heart is clearly in the right place, with its message of “living life to it’s full” being one that is very easy to get behind.

All in all, Departures, while not the most original film and despite falling very much into “weepie” territory, is still worth a look. With a pair of charming performances from Butterfield and Williams (who really ought to make more films together) and an overall well-intended message, Departures never fails to be a rather sweet and heart-warming watch.