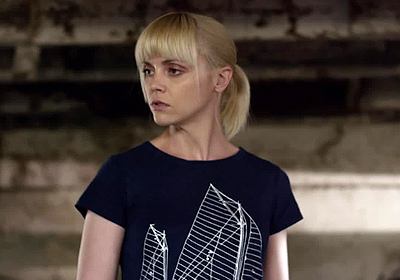 The mind is a complicated beast. It’s the part of us that we rely on to keep us balanced and stable in this increasingly crazy world. However, it can just as easily turn against us and cause us all manner of trouble, whether it be giving us visions of horrors that aren’t there, voices that come from nowhere and feelings of despair and paranoia that we might think the world is somehow against us.

While this could make for an interesting subject matter for a great film (and indeed it has in the past), unfortunately, the psychological thriller Distorted, is not one of them, giving us instead a rather clichéd and surprisingly dull thriller that wastes whatever potential this premise could give it.

In an effort to improve her mental well-being, Lauren and her husband Russell move into a plush, state of the art apartment complex that looks to be the perfect place to allow her to regain control of her mind. However, Lauren soon discovers that her new dream home might hide a far more sinister purpose, one that seems determined to break her already fragile mental state completely.

Let’s get his out of the way quickly; Distorted is dull. Very dull. How dull is it? You know that feeling when you’ve been reading a boring book for a while and you find yourself having to go back and re-read parts again? Well imagine that but instead, you have to go back and re-watch entire portions of a film because you’ve become so bored that you find yourself daydreaming about other more interesting things. That’s how watching Distorted feels.

It’s a shame that this film falls so flat because the story does have breadcrumbs of something possibly interesting hidden within it. The recurring thread about subliminal messaging and how it can be used to subtly manipulate people with fragile minds is fascinating, even if it seems to be lifted from a 1970s spy thriller. There is also a potentially interesting late plot development that suggests that extreme grief can cause people’s minds to break with reality is not too badly executed (it’s not amazingly executed but it’s not terrible) and it does almost lead to things looking up for the film.

However, the film-makers seem determined to take whatever potential the film has going for it and buries it under a boring clichéd conspiracy story whose slow pacing and mediocre execution just leaves you praying for the end credits to roll and spare you from the tedium. The imagery of subliminal messaging is just more annoying that disorienting (I’d highly recommend those with epilepsy avoid this film due to the use of strobe effects) but rather hilariously the messaging has words like “failure” and “flawed” flash upon the screen because it almost exactly reflected my own thoughts while watching the film.

On the acting front, things are just fine but really anything to write home about. In the lead role, Christina Ricci gives a performance that is serviceable but doesn’t really leave much of an impression, with the actress spending much of the run time with an expression of mere mild irritation by the conspiracy growing around her as opposed to the more fitting reaction of terror and paranoia.

Ricci ’s attempts to seem paranoid also comes across less as a woman on the verge of a breakdown and more like someone who just discovered Infowars and now thinks she knows the “truth” about the world and wants to tell everyone about it. I will give credit though to a late scene where the character suffers a traumatic flashback that reveals the root of her mental anguish, with Ricci managing to pull off the grief and torment of the moment to decent effect, even if it’s a case of too little too late.

John Cusack also appears in a supporting role of a hooded conspiracy theorist who spouts off the kind of techno paranoid mumbo jumbo that Alex Jones probably uses as his warm-up act. It’s another rather uninteresting and rather phoned-in performance that either me had me wishing I was watching High Fidelity again or reminded me that John Cusack used to be in bigger and better films.

Distorted is not worth your time. It’s a dull and uninteresting slog of a film that wastes a cast who deserve better on a plot that wastes every chance it has to become something worthwhile. Do yourself a favour and skip this one.