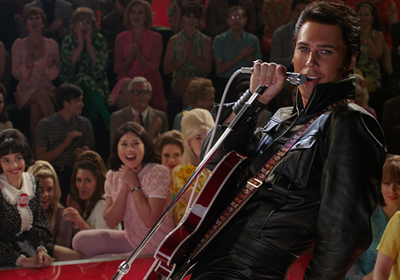 "This is a must watch, for all seasons and all audiences, whether you like Luhrmann’s work or are a fan of Elvis or not"

The much anticipated (and highly scrutinised) ELVIS movie directed by the ingenious (and opinion-dividing) Baz Luhrmann is here. Out now. In our faces. And boy does it a pack a punch. As an Elvis and Luhrmann appreciator, I must say, I was very much looking forward to watching this movie and like many audience members, somewhat protectively skeptical of the interpretation of Elvis himself and his life story.

One can only imagine that should there ever be a person that could scare the living heebie-jeebies out of any director, screenwriter or actor to direct, write or act about, it would be the man, the myth, the legend, Elvis Presley. And yet, the film stepped up to the plate and dare I say, it is quite the fitting and spectacular unfolding, should you be willing to go along with the electrifying ride.

The film follows Elvis, from his humble beginnings and inspiring surroundings up to his tragic passing, and all the well known and well documented events in between, from his mother Gladys’s passing, the wedding to Priscilla and that 1968 black leather clad comeback special. Albeit, some of these moments pass by in a flash of stylised and colourful montages such as the wedding, these still form a valuable part of the fast paced narrative. It should be noted that the narrative does not reflect a historically accurate portrayal of the whole of Elvis’s life, but again, this is an aspect of the film that the audience should remain open to – Luhrmann’s style almost certainly lends itself to spectacular storytelling, not necessarily, historical validity. What missed the mark marginally for me, was the thinly delved into portrayal of Priscilla, there was a feeling that her character could have been explored more.

There is a great juxtaposition in between the masterfully interpreted and show stopping music performances, full credit to Austin Butler’s commitment and dedication to the role, and the slow burning tragic ending of the movie. At some point, as an audience member I admittedly stopped inspecting his likeness and performance to and as Elvis and somehow gave myself and my suspended belief to the interpretation, and was greatly impressed by it. The narration and perspective of Elvis’s manager Colonel Tom Parker, masterfully played by Tom Hanks, further adds to an almost cautionary tale of fame and the trappings of super stardom.

This is a must watch, for all seasons and all audiences, whether you like Luhrmann’s work or are a fan of Elvis or not – one way or another, you will be fully entertained, immersed or pardon the pun, all shook up.