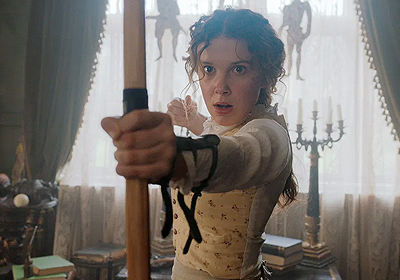 "Brown really brings Enola to life and is clearly having fun solving riddles or fighting villains. An impeccable heroine for young girls"

In 1887, Arthur Conan Doyle invented super-sleuth detective Sherlock Holmes. Solving many mysteries, battling many foes, and taking a despairing Doctor Watson under his wing. There have been incarnations of Holmes including Peter Cushing, Robert Downey Jr., Sir Michael Caine, Benedict Cumberbatch, Sir Ian McKellen, and even Will Farrell.

Now we’ve got Henry Cavill taking on the mantle but this is not Sherlock’s film at all. No. This is all about his little sister Enola Holmes.

Based on a series of books by Nancy Springer, Enola Holmes revolves around the titular character who is the estranged teenager sister of Sherlock and Mycroft. Living with her mother Eudoria in an overgrown manor house called Ferndall Hall, Enola’s rambunctious life is seemingly idyllic. However, one morning, Enola discovers that Eudoria has disappeared. When her brothers turn up, she hoped they’d help her solve the mystery but soon finds out that Mycroft wishes to send her to finishing school.

Famed for Stranger Things, Enola Holmes is played by Millie Bobby Brown (who also has a producing credit!) Here, Brown truly finds her stride. Her Enola is as quick-witted and as intelligent as her surname alludes. However, Enola is also naïve about the outside world. As she gets into scrapes and further investigates the whereabouts of her mother, Enola discovers that she may not know as much as she thought. Brown really brings Enola to life and is clearly having fun solving riddles or fighting villains. An impeccable heroine for young girls.

Brown is supported by a whole swathe of actors including the dashing Cavill as Sherlock. It is hard to take on the role but Cavill does attempt to make Sherlock his own. In this case, it is a softer version of the detective who raises an eyebrow or clenches a drawer whenever he is up against adversity. Warming to Enola, it is nice to see Sherlock with drips of humanity and without the foil of Doctor Watson. Sam Claflin continues his streak of playing absolutely odious characters and his Mycroft is no different whilst Helena Bonham Carter is great as Eudoria.

Directed by Fleabag’s Harry Bradbeer, and written by the acclaimed Jack Thorne, there are flourishing touches and flairs that make this a brilliant film to watch. There are two mysteries to be solved; the missing Eudoria and a murder plot against young Viscount Tewkesbury (Louis Partridge), a character who becomes key to Enola’s growth.

So there is so much story here that it becomes very fat at the middle. It’s chunky plot dampens the energy somewhat but it is clear it is necessary as Enola pieces the mysteries together, inviting the audience to solve it with her. Most importantly, the movie is a lot of fun, fashioned with beautiful period dresses and lavish set pieces.

A colourful spectacle drenched in all the vibrancy of the late Victorian era, Enola Holmes is a wicked adventure and it’s titular character deserves more outings like this.