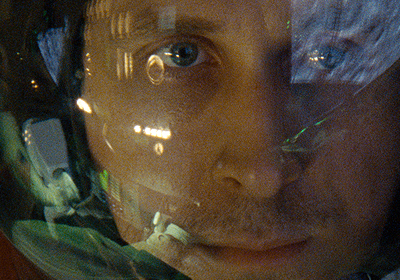 "doesn’t want to be a movie to celebrate a mission or a hero. It is a story about a man. A man who had to face loss and failure in order to make history"

After watching First Man in IMAX, it is clear that this movie didn’t want to celebrate the giant leap for Mankind, but rather the man who made the first step and how, all the failed attempts that lead to the successful mission, shaped Armstrong to persevere and walk on the Moon.

As a director, Damien Chazelle has an extremely dynamic style that is strongly influenced by the soundtrack. His technique is often ruled by a fast tempo and, since music is ever present in all his filmography, even in this project, soundtrack and sounds are used to mark the pace throughout the movie.

However, in First Man, silence also holds a deeper meaning. In fact, in all the scenes in which sound abruptly stops to leave space to a deafening silence, the moment becomes more poignant and intense.

As it should be clear from the title, First Man wants to tell the story of the vulnerable man behind the well-known hero. A man that is shaped by the loss of his daughter and is constantly reminded of how temporary life is with every new failed mission with NASA.

Ryan Gosling gives a compelling and honest interpretation of this fragile but determined man. His portray of Armstrong is gripping. He understands his flaws as well as his fears and how the loss of his daughter shaped every decision in his life.

Death becomes a great part of him as a man and as an astronaut, and every person lost through the Gemini and Apollo missions just make his resolution to succeed even stronger. Gosling is at his strongest in the more emotional scenes and all his expressivity comes out just through the look in his eyes.

Although the cast ensemble, as a whole, works as a well oiled machine and fully support the performance of the protagonist, unfortunately, Claire Foy’s talent is wasted by employing her in only a few scenes. When her character is given the chance to intervene in the story, Foy outshines everyone else with a powerful performance.

Her portrayal of Janet Armstrong is outstanding; she is the only one carrying the weight of the family on her shoulders, but her active time on the screen is not enough to allow the audience to understand her relationship with Neil.

Although First Man is not intended to be watched in IMAX, this well rounded experience is worthwhile for the way in which the sound is broadcasted from every side. Music and sound mixing have an important role in the film, and being surrounded completely by it in an IMAX theatre makes its impact even stronger.

Although many critics still have controversial opinions about the story and criticised the lack of stronger patriotism, First Man doesn’t want to be a movie to celebrate a mission or a hero. It is a story about a man. A man who had to face loss and failure in order to make history by stepping on the Moon.