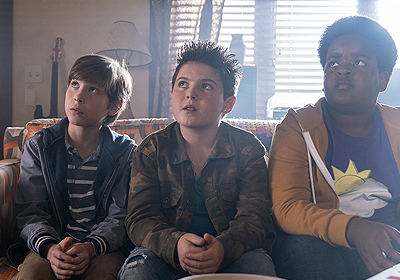 "This is exactly the kind of delinquent, immature madness that's to be expected as the Feature film Directorial Debut from Gene Stupnitsky"

I'm one of those people who sometimes wants a break from this crazy world for an hour or two to enjoy a comedy in the cinma, as it's always a good distraction and at times can be the ultimate anti-depressant. So Seth Rogan has decided to produce a comedy involving three young lads entitled 'Good Boys'. Totally incident free right... Yeah... I think we know better then that.

Thor (Not That One), played by newcomer Brady Noon is trying desperately to get to the cool kids table at school, Lucas (Keith L. Williams) is dealing with some bad news and Max (Jacob Tremblay) just wants to be with the girl of his dreams. Together they are three sixth grade 'Good Boys' who are invited to a house party where they get to play The infamous 'Spin the Bottle' kissing game. Problem is that these boys have never kissed anyone before, so they need to find out how which leads to some of the craziest antics ever done by young children in a movie EVER.

Not only do you need to see this movie, but I STRONGLY suggest you see this with a packed audience to be apart of the INSANELY hilarious uses of swearing, sex toys & references that have ever been put onto the big screen. This is arguably THE Funniest film you will see this year as long as you switch off your brain and just go in looking for a good laugh and believe me this movie was a barrel of laughs from start to finish. These three kids are so perfectly casted and have excellent chemistry together throughout.

This is exactly the kind of delinquent, immature madness that's to be expected as the Feature film Directorial Debut from Gene Stupnitsky who had previously produced 'Bad Teacher' and is a part of the team behind 'Superbad' & 'Sausage Party' so if these films are your goto comedies then you NEED to be there on opening weekend August 16th in UK Cinemas for a laugh your ass off night at the movies.