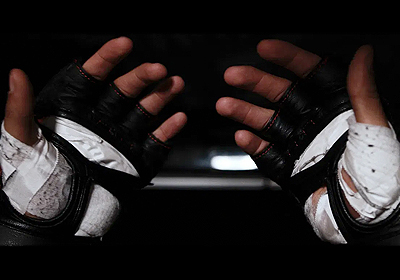 "An all round great film, and needs to be watched"

The film gives energy of a Rocky-like aim to viewers, along with a weird feeling of abandoned landscapes within urban surroundings set in the world of mixed martial arts. Within this psychological thriller, Cassius Corrigan stars as Alonso Santos who is a young man living in Miami, with a troubled soul due to his diagnosed disorder regarding his multiple personalities.

His disorder is diagnosed by a therapist named Isabela (Yara Martinez), who has been assigned as his therapist by the courts, and throughout the film we find out that his disorder is triggered when Alonso feels threatened and his alter-ego, Huracán shows up, but as Alonso is on parole by the courts, and looking at being made homeless, he is trying to make his living within an arena of cage fighting, and is often there, when he isn’t jumping between prison and therapy.

As his therapist, Isabela attempts to help him depart from his alter-ego by trying to lead him to the source of his long-lived trauma, but delving deep into his childhood, using experimental methods to try and find a way to help Alonso break free, this method becomes unsuccessful, and as the film plays on I found that this film plays heavily on mental health and how serious it can be when people suffer from it in all different types, including personality disorders.

I admit after reading the Synopsis I was unsure how this film would be, but I found myself enjoying this film, the intensity and the performances of Cassius Corrigan is perfect. The story line isn’t complicated and is easy to follow and to keep up with what is happening. I felt gripped from the start and before I knew it, the film was concluding. I felt this film does a lot for awareness with regards to dissociative identity disorders aka personality disorders, and how difficult it is for the person and others around them. I even teared up at a few points in the film, and I hope this film gets the praise it deserves.

Well done to Cassius Corrigan for his acting, as this was his debut film, and he did a brilliant job at not only starring in this but a great job at directing and writing this film too. I never usually like a lot of films with fighting, as it triggers my anxieties, but with this film it didn’t regardless of the fighting scenes. An all round great film, and needs to be watched.