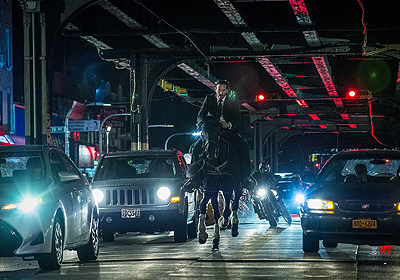 I have been a fan of action movies since birth. Growing up I watched Arnold Schwarzenegger plough through endless goons and killing the overconfident bad guys. John Wick Chapter 3: Parabellum is another exciting addition to a franchise that is testament to the old-school One VS The World concept with dispatching enemies in some of the most creative and GRUESOME ways imaginable.....No really at one point I screamed JESUS CHRIST to the highest pitch possible.

John Wick (Keanu Reeves) is seriously not messing around this time as he actually has the ENTIRE world of deadly assassins gunning for the $14 Million bounty on his head put on him by Winston (Ian McShane) after John commits the most disrespectful act by killing within The Continental (A big No-No in the eyes of The High Table) However out of respect Winston gives John an hour head start which angers The High Table. In comes The Adjudicator (Asia Kate Dillon) who hires Zero (Mark Dacascos) to help her punish those who helped John including The Bowery King (Laurence Fishburne) & The Director (Anjelica Huston). Meanwhile John (with a little help from Sofia played by Halle Berry) try to find a way out of his debt and learns that he must make some hard choices in order to pay for the consequences of his actions.

My oh my oh my....This film doesn't take long in getting the body count started. As I'm sure you're aware this indeed kicks off minutes after the events of Chapter 2 and I gotta say I am very VERY interested in watching all 3 films back to back (make it happen Prince Charles Cinema... MAKE IT HAPPEN!)

As this is the ULTIMATE Love Letter to everything we loved about old-school action movies with a lot of 'The Raid' style fight scenes added with some of the most experimental choreography ever put into a film mixed with a blend of great performances from some of the most legendary actors including Keanu Reeves at his most desperate and yet most focused to survive and is standing his ground with this iconic character proving that not even a 14 Million Dollars is enough to stop the one man killing machine.

Ian McShane must take the grand prize for his very chill performance as Winston...But let's be honest Ian McShane has a habit of stealing the spotlight in most movies these days. Have to give Sir Bron of The Blackwater himself Jerome Flynn some respect for that attempt at that 'Accent' he tried to pull off too...You'll know when you see it and you NEED to see this movie IMMEDIATELY. The Soundtrack is your average awesome 'This guy ain't playing around' music but it fits in perfectly here.

One of the most entertaining (and I must say GRUESOME) film trilogies of the 21st century. I would indeed recommend this for Horror fans too as it has a chilling tone for most of the movie as this is indeed about a man who has people wanting to kill him at every corner. More Please!!!