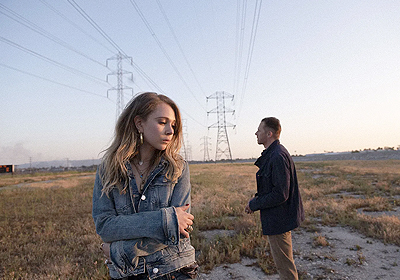 Set in contemporary LA, Lost Transmissions is a melancholic story about the American health system and its lack of support towards mental health disorders’ patients and their families. Directed by Katharine O’Brien, the film follows Hannah, an inspiring singer and song writer, who, after meeting Theo Ross, a famous music producers and finds herself entangled in the difficult mission of having to save him from himself.

Their friendship starts through music, but, after Theo decides to go off his medicines and his schizophrenia takes over, Hannah finds herself trying to save him while keeping her depression at bay. Through ups and downs, Hannah finds herself trying to convince Theo to get checked into a mental health facility. However, the American health system is not equipped to support him and their bureaucracy allows each patient to slip through the cracks and be admitted only for the mandatory 48hr psyche hold.

To try and save Theo, Hannah stops taking care of herself and almost follows him into this destructive rabbit hole, while losing the opportunity of a life time to write for a famous pop singer. Lost Transmissions is a classic indie film that pushes the audience to watch something uncomfortable and witness reality unfold on screen.

The story doesn’t sugarcoat or glamourises mental health disorders, on the contrary, it shows the toll it takes on family members and friends when the health care system fails the patient, even when it is clear that they are dangerous for themselves and other people.

The flow of the film seems a bit discontinuous at times; the audience doesn’t know how much time has passed; everything could be happening within a day or a whole year. While this makes the movie feel like it could have a shorter run time, this strategy is completely in line with Hannah and Theo’s mental state and stability. With this chronological confusion the audience has a front row seat to how it feels when a disorder, as serious as schizophrenia or depression, takes over your life and you can’t let go.

Juno Temple and Simon Pegg are both brilliant in portraying these two damaged characters. Their chemistry is delicate and it flips the dynamic between man and woman. In this story, Pegg’s character is the most fragile one. Theo is constantly overwhelmed by his life and his illness and he constantly has to rely on other people. Pegg is brilliant in portraying Theo and all his demons in such a realistic way.

In the film, Hannah becomes the strongest character; Temple is brilliant in mixing together Hannah’s fears, instability and strength when she has to show up for Theo. These two character’s juxtaposition gives depth to the story and helps the audience find an emotional connection with the story by feeling invested in Theo and Hannah’s friendship.

With her directorial debut, O’Brien has brought to the screen a story about the inadequacies of the American health care system without romanticising it. And, although her realism makes following the film difficult, Lost Transmissions is a movie that is worth watching and will move you to reflect on such a contemporary issue that still gets overlooked.