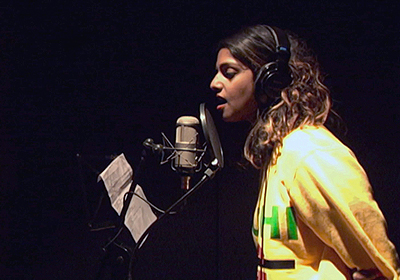 "you do come away feeling you have been given access to many aspects of the fierce person that is Matangi, Maya and M.I.A"

Raw, honest and no holds barred. M.I.A is renowned for these traits and this certainly comes across in this documentary directed by her friend and director Steve Loveridge.

The documentary is a must watch for viewers who are already admirers of Maya's work but works very well too, for those who know of her; throughout the film, you learn a lot about her and her artistry - mainly that behind every visual and catchy song there is a deep rooted message stemming back to her Sri Lankan Tamil roots.

The documentary seems to be years in the making, as we are treated to footage that she has filmed from more than ten years ago while she was a university student at Central Saints Martins, director Steve making cameos here and there, solidifying their close relationship.

What spoke the loudest to me as a viewer, was Maya's constant battle to bring attention to the political issues in her home country to the masses and not being taken seriously despite her unflinching determination. Steve does a fine job at documenting all of this; it must be daunting to receive over 1000 hours of footage and turn it into an impartial (given their friendship), interesting and honest piece of film, and together they have achieved this. By the end of the film, you do come away feeling you have been given access to many aspects of the fierce person that is Matangi, Maya and M.I.A.