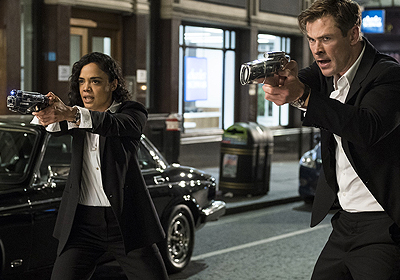 "it does earn some brownie points for at least expanding on the universe set up in the original films, something that previous team movies have failed to do"

After an absence of seven years since the last film in the MIB trilogy, MIB returns with the addition of "International" signifying the existence of the organisation as a global agency. The story this time doesn't utilise the characters created by Tommy Lee Jones and Will Smith so they do not make an appearance in the movie in person, but only as a visual representation by way of a painting, which was a nice touch.

As the film is a continuation of the franchise, set in the same universe some familiar aliens make an appearance, like the foul-mouthed Worm Guys together with the return of Emma Thompson as Agent O, the head of MIB. This time evaluating potential new recruit Molly Wright aka Agent M played by Tessa Thompson. Agent M is assigned to the London Office, and under the supervision of High T, the head of MIB UK played by Liam Neeson she is teamed up with London's top agent - Agent H played by Chris Hemsworth.

As a child Tessa Thompson's Molly witnesses from her bedroom window her parents having their memory erased and altered by two members of the MIB using the neuralyzer after they encounter an alien. Fortunately, she escapes being neuralyzed as the MIB believe she is sleeping and has not seen the alien (which she has).

Years pass and we catch up with Tessa Thompson's Molly Wright, labelled as delusional regarding her beliefs in extra terrestrials and the MIB. She's been repeatedly turned down for jobs with the FBI and CIA seeking to work for the MIB. Using the knowledge and skills she's acquired in the years since her alien encounter she manages to work out a predicted trajectory for an alien landing whilst she is working as an IT support tech she follows the MIB to their headquarters.

At the headquarters she believes she has successfully infiltrated the MIB but is captured and questioned by Emma Thompson's no nonsense Agent O, before she is about to be neuralysed, she successfully bargains her case for joining the MIB and is granted temporary probation status as Agent M and assigned to the London Office of the MIB, under the care of High T played by a gruff and weathered Liam Neeson and gets assigned to work with Agent H played by Chris Hemsworth after some coercing shenanigans.

MIB: International lacks the charm and charisma between the two lead characters that made the original films enjoyable. Tessa Thompson gives a good performance, but Chris Hemsworth is way too reminiscent of Thor in his acting and mannerisms. Liam Neeson's character merely acts as a plot device and is used minimally. Emma Thompson also gives a good performance. Rafe Spall’s Agent C, Kumail Nanjiani’s Pawny and Rebecca Ferguson’s Riza are nice additions to the series. Overall the film is best described as average.

MIB: International is visually stunning and the sound pops in IMAX, it does earn some brownie points for at least expanding on the universe set up in the original films, something that previous team movies have failed to do, it isn't as funny as the previous outings but it is a fun ride, albeit average as previously stated.

MIB: International knows what it wants to be, that being said the original MIB trilogy is a hard target to beat and you would need to bring your A++ game to do that, but when you can only deliver your B game you get three stars for trying.