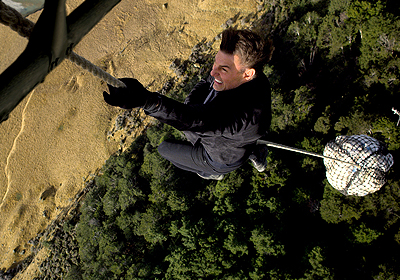 Additions to this film are Henry Cavill as August Walker - a CIA black ops assassin and Angela Bassett as Erica Sloane, the new Director of the Central Intelligence Agency.

During an arms deal that goes wrong at which Hunt (Tom Cruise), Benji (Simon Pegg) and Luther (Ving Rhames) are involved in, The Apostles manage to acquire three nuclear bombs. As suspicion falls on Hunt (Tom Cruise) and his IMF team because of their failure, the director of the CIA Sloane (Angela Bassett) brings in CIA black ops operative Walker (Henry Cavill) to shadow the IMF and aid in the recovery of the nuclear devices, using whatever means necessary.

Hunt (Tom Cruise) together with his team and Walker (Henry Cavill) set off to Paris to meet with an arms broker known as the White Widow (Vanessa Kirby) whilst Hunt (Tom Cruise) is impersonating the leader of The Apostles John Lark.

With it's multiple plot twists, the introduction of old and new characters combined with nods to the previous films in the franchise and of course the spectacular set piece action stunt sequences, Mission: Impossible - Fallout is an entertaining and enjoyable movie addition in this now 22 year old film franchise. Mission accomplished: a worthy four stars.