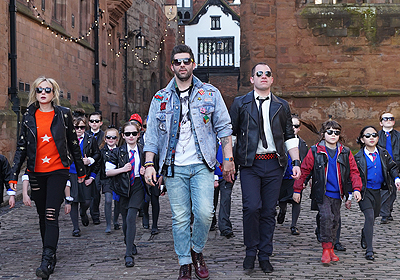 "proves that the Nativity franchise, with all its unique feel-good charm is here to stay"

Nativity Rocks! is the fourth entry in Debbie Isitt’s ever popular, feel-good, family friendly franchise, this time around, we are back with the children of St Bernadette’s Primary School in Coventry as the staff and students audition for a coveted place in a spectacular rock musical competition.

This is an inoffensive feel-good film that just like its predecessors has music at the centre of proceedings but with the added heart of reunion and togetherness, with one of the main plots being to reunite Doru (Brian Bartle) with his father (Ramin Karimloo).

We follow Jerry Poppy (Simon Lipkin) as he searches for his long-lost brother as he crosses paths with his former rival the ruthless and larger than life show director Emmanuel Cavendish, played by Craig Revel Horwood, who seemingly revels in portraying the villain of the piece.

Celia Imrie reprises her role as Headmistress Mrs Keen, who gets in on the action with a cast consisting of Helen George as the Social Worker Miss Shelly assigned to Doru’s case and Anna Chancellor and Hugh Dennis as the wealthy and oblivious parents of Barnaby (Rupert Turnbull). Pack full of cameos with recognisable favourites Ruth Jones, Meera Syal and Jessica Hynes, Nativity Rocks! is a delight to watch from start to finish.

There’s a lot going on in Nativity Rocks!, and at the end of the day, the film is well paced and well acted and proves that the Nativity franchise, with all its unique feel-good charm is here to stay and makes it a wonderful film to share with the family over the festive season.