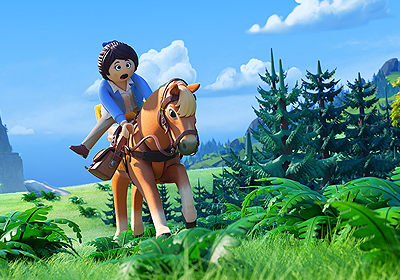 Let’s start off this review by letting you know that I was never a Playmobil© fan as a kid, I was always in the LEGO© camp, so Playmobil© passed me by; I knew of it, but we didn’t have the sets growing up, so when it was first announced that they were to make a film, based on the popular toy brand, I was sceptical. I really shouldn’t have been, I mean this is the studio that successfully brought to the big screen Shaun the Sheep!

So going into Playmobil: The Movie I had no idea what to expect, I knew that it had the voice talents of Anya Taylor-Joy, Kenan Thompson and Daniel Radcliffe, I saw the teaser trailer and stills from the film, but I really had no idea how it would begin and I was pleasantly surprised.

It opens with a musical number, sang by the infinitely talented Taylor-Joy, her character; Marla longs to travel and see the world, before she heads off for more studying, however tragedy befalls her, when her life is turned upside down and becomes the sole care giver to her little brother; Charlie (Gabriel Bateman), who seems to resent her somewhat, since she took charge of the household, and as a result, she isn’t as fun loving and carefree as she used to be.

When they are transported to the Playmobil© world via a lighthouse (it's in the Trailer, so not a spoiler), the action begins, they are thrust into a battle between Pirates and Vikings and inadvertently uncover a plot by Emperor Maximus (Adam Lambert) to make the strongest fight for his amusement in the colosseum. Charlie; now in the guise of his Playmobil© character, is a strong Viking, the strongest there is and becomes the target for Maximus’ next champion.

Along the way, Marla befriends Del (Jim Gaffigan) and Radcliffe’s secret agent Rex Dasher, who is a clear cross between Harry Potter and 007, it’s great, together they go on an adventure to rescue Charlie, and other would-be combatants that have been taken to fulfil Maximus’ plot.

Playmobil: The Movie a fun-filled adventure that will have you smiling from ear to ear, it is well crafted and visually stunning, backed by incredible voice performances across the board, don’t let scepticism stop you from seeing this film; turning toy brands into films has been successful, and this one follows suit, so I, like a lot of people will be happy to see what they do next, it is left wide open for a sequel, so what will they do next, only time will tell.