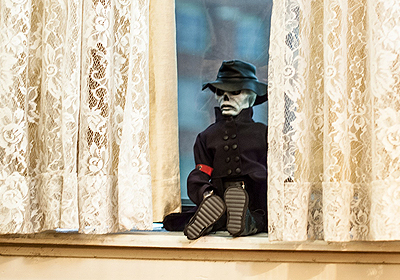 A group of people attend an auction/convention with the intention of selling the puppets they own as the puppets were made by a mad man, Andre Toulon, who worked for the Nazis during World War 2. These puppets have the ability to come to life and kill anyone who isn't in favour of The Nazi cause....Which is pretty much EVERYONE!

This film had a TON of potential with the likes of such horror icons as Udo Kier and Barbara Crampton involved and backed by FANGORIA, sadly I felt this film missed its mark as it felt a little dull as most of the characters were not that intriguing with the exception of Udo Kier's take on the franchise's main character Andre Toulon which also confuses me as in the original puppet master films Toulon fought AGAINST The Nazis but in this he appears (in the really well done opening credits) to have worked with them during World War 2. Either way a character that is so important to the franchise should've had more screen time.

The puppets themselves look amazing and as always have their own unique means of dispatching their victims. There's a lot of gore and the main theme of the movie is great but sadly I can't say the same of the rest of the score. I also can't speak too highly of the performances either with the exception of Crampton and Kier.

This was a film which had it's good horror moments but missed opportunities to utilise its legendary cast for a new young cast who sadly didn't make me care about the perils that they were facing.