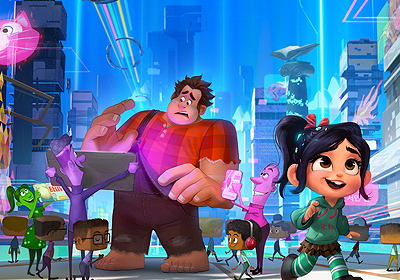 "a fun, vibrant and well paced film, the voice work is incredible and further solidifies this as a franchise destined for greatness"

Ralph Breaks the Internet is the latest offering from powerhouse Animation Studio Disney, the follow-up to the incredible Wreck-It Ralph in 2012. Directed once again by Phil Johnston and Rich Moore, Ralph Breaks the Internet is a story of friendship and follows the exploits of Ralph and Vanellope (John C. Reilly and Sarah Silverman respectively) as they venture into the Internet in order to save Sugar Rush after the steering wheel of the Arcade game is broken and rendered unusable, threatening the future of the game.

In true Disney fashion, the Internet world created is stunning, with a healthy dose of nods to existing brands such as eBay and Amazon, and with a few fictional ones like BuzzTube thrown in, it is creative and rendered extremely well.

With it being a Disney film, there is no shortage of it taking playful jabs at itself, especially during the "Oh My Disney" sequence that has been used in the marketing, utilising a tonne of familiar cameos from Marvel to Star Wars to the Disney Princesses themselves, when Vanellope comes face-to-face with them, seeing all the Disney Princesses together is incredible and hilarity ensues with the exchanges that occur.

Alan Tudyk, who was King Candy in its predecessor returns to voice KnowsMore, a search engine and Gal Gadot joins the Wreck-It Ralph world as Shank, a racer from the more mature version of Sugar Rush; Slaughter Race, that Vanellope longs to join, both are wonderful additions to the film. A special mention to Taraji P. Henson's Yesss who adds gravitas to proceedings.

Whilst it isn't strictly a film adapted from a video game, I would have liked to have seen more cameos from video game characters, like with its predecessor, a few favourites do show up. There are also a couple of cameos from Internet Celebrities Colleen Ballinger aka Miranda Sings and Dani Fernandez.

Ralph Breaks the Internet is a fun, vibrant and well paced film, the voice work is incredible and further solidifies this as a franchise destined for greatness. It has a wonderful message of friendship and forgiveness, and is an engaging ride from start to finish.

If they make a third entry into this franchise, I hope they return to the video game world, but with where the film leaves off, it wouldn't surprise me if they return to the internet, and I'd welcome it, especially if that means Gal Gadot's bad-ass racer Shank returns.