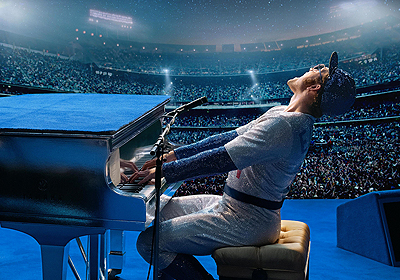 "this is a great, largely warts and all yet fantastical telling of a great man and impeccable showman and his journey through life"

What do you get if you mix a little Bohemian Rhapsody with a dash of Grease, a light dusting of feel good and a good hard splash of heartbreak and addictions. You get what is frankly an amazing, at time sobering yet all the while surreal look at one of England's greatest artists of the last 50 years.. Sir Elton "Hercules" John!

As you can guess, Rocketman is the biopic of Sir Elton John, authorised by the legend himself. It would be forgiven in thinking that this would result in a more sanitised version of events being put to film. What we actually get is a high energy, frantic, surreal ride from Elton’s childhood growing up in what essentially seems to be a loveless or at least somewhat repressed family, to his teen years finding his talent for music, taste in music changing and discovery of his sexuality in a time where being outwardly gay wasn't the done thing. Through breaking America and having his heart broken, Rocketman doesn't allow room to breathe or allow the audience to spend a second being bored, the two hour run time flies by at a blistering pace and it’s always emotionally charged.

When Taron Egerton was cast there was a lot of talk of how well he would be able to pull of Sir Elton's larger than life personality and stage presence. If anyone was in doubt of this being an issue then within the opening five minutes they will be blown away. The little mannerisms, looks and aura are all there to be seen immediately and there's quite a striking resemblance when all is said and done. The rest of the cast is not lacking either with Jamie Bell putting in an impressive performance as Elton’s sometimes best friend and songwriter Bernie Taupin, Richard Madden formerly of Game of Thrones and The Bodyguard portraying the infamous John Reid, Elton’s manager and sometimes lover and of course Stephen Graham putting in an impressive turn as Dick James, the man who gave Elton and Bernie their “big break”, there’s a small if rather jarring cameo by Leigh Francis, luckily this can be over looked given how good the final product is.

It wouldn't be a musical biopic without a superb back catalogue to draw from and Rocketman doesn't disappoint, what it does brilliantly is use the songs chosen to tell a story, by playing with the arrangements and tone to deliver new life and meaning to the songs that you may not otherwise associate with the life events depicted on screen. The majority of choices are of course from Elton’s earlier years, the events taking place before his rise to prominence.

There is of course the same issue that Bohemian Rhapsody was criticised for, which is that whilst the film is entertaining, there are some inaccuracies which were sacrificed in order to make a compelling narrative. These are for the most part easily forgiven, however the obvious and glaring one is that of John Reid who, going by the film you would assume was out of Elton's life by the early nineties, however it reality it was 1998 before their professional partnership officially ended.

As always to summarise, this is a great, largely warts and all yet fantastical telling of a great man and impeccable showman and his journey through life, self discovery and to be loved properly, that will make more sense on context.

Minor issues aside, this is a solid 4.5 stars and I would be surprised if there wasn’t at least BAFTA and Academy Award nominations given its brilliance.