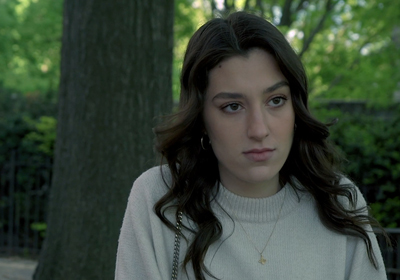 The conversation between two sisters Amy and Sarah (Salomé Robert-Murphy and Lexie Duval) in Sell It To Me A Different Way (2021) is so achingly honest and intimate that audiences will walk away feeling that they have seen inside these characters' souls. After their difficult father passes away without leaving a will, the sisters are forced to handle affairs on their own. The older sibling, Duval, feels that she has been handed the short stick, having cared for their father during his final days. Robert-Murphy's character wants nothing to do with her father and his inheritance, having left home years before. While neither feels that the other understands her respective trials - Robert-Murphy pleading to be left out of things while Duval believes her sibling has shirked her familial duties - the two toe a line of love and loss, of betrayal and trust.

With so much to unpack, one might expect that six minutes only provide a small sample of these characters' potential. However, Travis's tight script allows us to see into these characters' past and present, and Duval and Robert-Murphy expertly navigate a remarkable scope of emotions. In few words, we sense the long history between the two, and we feel all of the grievances and insecurities that remain unspoken Mid-conversation, Robert-Murphy finishes her coffee and nonchalantly grabs her sister's, an intimate and familiar gesture that, in one motion, conveys their relationship's complexity. While her character might have been easily dismissed as the younger brat, Robert-Murphy's brilliant performance invites our sympathy. She delivers a character that she infuses with uncertainty, guilt, and the underlying sense of self-preservation. The sisters flip between understanding and outrage with the ease of real siblings. And that closeness only adds to the growing distress as they struggle to find common ground.

It's not a film with complicated production or intricate plot lines, but in the simplicity of the composition, the one-shot format, and the brilliant two-women cast, it grasps on something real and heart-wrenching that any audience will recognize.