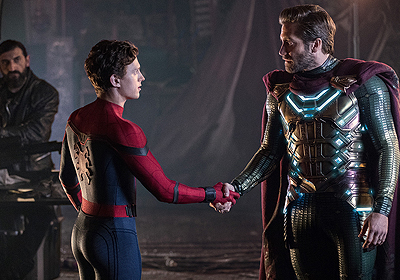 "Amazing, Spectacular, Superior. It's also got a lot of heartwarming moments and sentiments that are great for the whole family"

Spider-Man: Far From Home has the dubious task of being the final film in Phase 3 of the Marvel Cinematic Universe, being the sequel to the already brilliant Homecoming and being the next MCU film after what will inevitable the highest grossing film in cinema history (for a time at least), that being Avengers: Endgame.

There's a lot of factors in play that could have caused this to be a very average safe entry, however as we have come to expect with Marvel, they have stepped up and hit it out of the park once again. Let's start with the general feel of the movie, where as Endgame was for the most part very serious (America's ass aside..) Spider-Man: Far From Home has its  tongue very much in cheek with its comedy, whilst also including some coming in age moments for our teenage hero. There are a lot of nods to previous entries and call backs to previous entries to satisfy the rabid fans and the story works as a standalone entry (although a watch of Homecoming will increase your enjoyment tenfold).

Cast wise there's no Robert Downey Jr., this time to act as a mentor (see Endgame if you need to know why, be warned this film will be a huge spoiler if you haven't seen it), however the cast doesn't lack whatsoever. Tom Holland reprises his role as Peter Parker/Spider-Man, by now we know what to expect from him but he still impresses as a sometimes fish out of water teenager dealing with all the troubles that come with it... with the weight of saving the world on his shoulders (Interestingly his 5th time playing the character even though it's only the second in his Spider-Man series).

Zendaya is back as well this time her "Michelle" character has been dubbed MJ (Michelle Jones), all but telegraphing the path which her character develops towards. That said, she's a darkly awkward delight throughout.

Samuel L. Jackson and Cobie Smulders return as Nick Fury and Maria Hill respectively, they're great as always, however it could be argued they're a little underused and when they are its for exposition but the plot doesn't suffer for it. Without touching too much on the potential spoilers, Jake Gyllenhaal is an absolutely amazing addition as Mysterio, a lot of questions were asked when the synopsis and trailers were released seeming to show Mysterio as a hero, whilst I won't spoil anything I can confidently say the way in which he is written and portrayed is brilliant and a complete highlight.

One of the best things about the decision to use Mysterio is the visual effects that it allows to be used, there are so many small references and subtle nods to source material in these scenes it would be impossible to mention them all, but it's worth noting that whilst I personally found these very entertaining it may be a little overwhelming for the un-initiated and also a little CGI heavy for the casual viewer. All in all it is visually stunning throughout. This is the kind of film that IMAX was made for and should be viewed in for the best experience in my opinion.

To summarise, Spider-Man: Far From Home is not only a great follow up to Spider-Man: Homecoming, it also feels like a great jumping on point post Avengers for new fans. To describe it in 3 words.. Amazing, Spectacular, Superior. It's also got a lot of heartwarming moments and sentiments that are great for the whole family.

Also, when it comes to post credit scenes, Spidey doesn't disappoint in the slightest, and blows the landscape wide open for any further instalments, to quote a certain character.. GET ME SPIDERMAN!!!