Spider-Man: Into the Spider-Verse(2018) by Marc Jason Ali 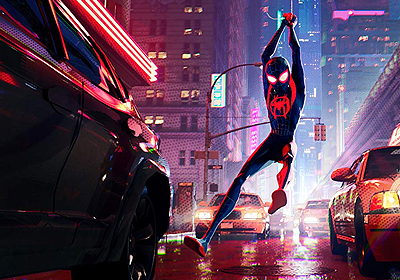 "like a comic book come to life, mixing in different art styles"

Spider-Man: Into the Spider-Verse is the latest adventure for the Friendly Neighbourhood Spider-Man, with a difference, this time around it centres on Miles Morales (Shameik Moore), in Marvel Comics lore Miles is from the Ultimates Universe (Earth-1610) and takes over the mantle of Spider-Man from the dearly departed Spider-Man (Chris Pine), and whilst it plays out as an origin story for him, there is so much more to this film with the emergence of the threat from Wilson Fisk aka The Kingpin (Liev Schreiber) as he plans to fracture reality for his own purposes.

Miles is joined by other Spider People from across the multi-verse; Spider-Man aka Peter B. Parker (Jake Johnson), Spider-Woman aka Spider-Gwen (Hailee Steinfeld), Peni Parker and her biomechanical suit SP//dr (Kimiko Glenn), Spider-Man Noir (Nicolas Cage) and the comedic Spider-Ham (John Mulaney) as they try to rectify things before the damage is irreversible and attempt to go home to their respective Earth's, each Spider Person is given a comic book inspired introduction that fits the overall tone of the film perfectly.

Whist Wilson Fisk is the main villain, Spider-Man: Into the Spider-Verse utilises multiple villains perfectly with appearances from Scorpion, Tombstone and an interesting take on Doc Ock, that I won't mention here as I think it is better not knowing as you go in.

Right from the get go, Spider-Man: Into the Spider-Verse is a gorgeous film, like a comic book come to life, mixing in different art styles depending on the character in the scene. It is a visual feast bolstered with an incredible score, soundtrack and voices that fit the characters perfectly.

Packed full of easter eggs and an incredible and heartwarming cameo from the late, great Stan Lee, Spider-Man: Into the Spider-Verse is an incredibly well paced, action packed film that is engaging with a solid flow to the story being told on screen, with the direction that Spider-Man: Into the Spider-Verse takes, I fully look forward to more stories revolving around Miles, the film finishes strong and with a multi-verse of possibilities, the sky's the limit.