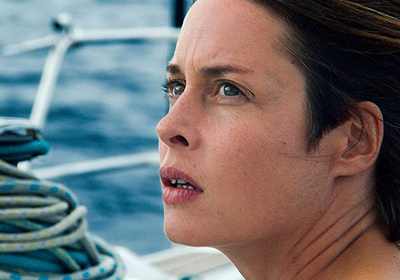 "Lost in equal measure, slicing through every wave together"

‘Styx’ in Greek mythology is a deity and a river, forming a boundary between Earth and the Underworld. It is also the name given to director Wolfgang Fischer's film.

We see the transition that Rieke (Susanne Wolff) makes, from her hectic day-to-day living as a paramedic to embarking on a solo journey in her 12-meter yacht Asa Gray, leaving behind what appears to be a monkey-infested Gibraltar, a British colony, the significance of which is highlighted later on in the film.

She is set to sail to Ascension Island, an isolated volcanic island in the Atlantic Ocean, between Angola and Brazil. The appeal of which is it’s where Charles Darwin, ‘the architect of evolution,’ Kew Gardens and the Royal Navy built a fully functioning, yet completely artificial ecosystem.

At first Fischer takes a relaxed documentary approach, comparable with the speed at which Rieke is handling the yacht. Wolff, herself, is an accomplished sailor, and emits an air of being meticulous, at the same time she is pragmatic. But after a particularly violent tempest our female protagonist spots a boat in distress on the horizon. The vessel bestowing dozens of refugees, and that is only the flailing hands she can see in the air.

She alerts the coastal authorities but nothing happens for several hours, and refugees begin to jump overboard, including a teenage boy (Gedion Oduor Weseka). He, ever the determined one, reaches the Asa Gray, whereupon Rieke lifts him on board. In a poor state of health, he appeals to her kind nature, and explains about the sister he has left behind on the trawler.

Rieke’s dilemma is such that maritime law stipulates she is under a legal obligation not to intervene, and yet if she doesn’t then over more than a hundred people will drown. She elects to muzzle her fears and attempt to rescue whomever she can.

Styx can be compared to the 2013 film, All Is Lost, directed by JC Chandor, and starring Robert Redford, who, also a solo voyager sails into a violent storm. The difference here though is that our main protagonist is not only battling with the elements but also 'the Western world's approach to refugees in distress.’

Wolff practically carries the entire movie, in what is comprised of 80 percent silence, and 20 percent dialogue. The ocean expansive as it is, can be a daring adventure for one person, and a burial ground for another. And despite Reike and the teenage boy swimming in the same waters, their ideas of paradise fall into conflict with one another. The introduction of a second character might well have placed the fine-attention-to-detail script in jeopardy, however, as it happens most of the enthralling parts in the film occur after the delicate passenger awakens and is hit by the reality of what the situation is; and whist he mightn’t be able to utter much in English, what he does is enough to convey that aboard the sinking vessel are his friends and family, not just “unidentified refugees.”

Styx acts as a symbol of humanity, and all that we unjustifiably sacrifice. Most of the shots are caught from a God’s-eye-view, (or, more appropriately, a Reike-eye-view), allowing us to see what she sees. The rope of life can most certainly be a treacherous tightrope sometimes.

Dunkirk is one such film, ‘an existential masterpiece,’ in some people’s opinion, where director, Christopher Nolan plays on our senses in a way which has not done before. Throwing up the idea of ‘the meaning of life,’ and all of its delicacies, whilst setting it against a meaningless backdrop of war. He presents three elements to us - earth, air and water, each of which denote life, and yet also in Dunkirk they could be what costs someone their life, as each man awaits what their judgement will be.

On land up to 400,000 soldiers were forced towards the sea, where destiny, whether it was from up above or behind them would be answered. The seemingly ever-expansive Big Blue was all they had in front of them, despite their homeland England being within grasp. Some decided to negotiate their way boat by boat, to dilapidated barge, so desperate were they to evacuate the hellish beach, where torpedoes would deceitfully linger, and missiles would stream down from the sky. Only a miracle, it would seem, could help them.

Cinematographer Benedict Neuenfels creates a strong contrast between ‘detachment’ through the use of drone photography, almost frame by frame, and ‘intimacy,’ with the footage we see of Reike on the boat. And anything shot from above the ocean reiterates our desensitised compassion; where “les etrangers” are an ominous oppression, and the cries they make, mere wisps of air.

The colour graders shine the brightest lights, as they turn the Atlantic into a soothing, trance-inducing blue, in sharp contrast to the life-and-death situation that has befallen upon these people. The rescue lines in bright red particularly stand out against the big blue and are a strong visual used throughout the film, underlining the message of how little the cost incurred to throw out a help line. A line we should all be entitled to, where no higher weighting should be attached to anybody.

In conclusion, the screenplay by Fischer and co-writer Ika Künzel pinpoints more specifically the reasons behind the West’s lack of interest and corporate hardheartedness, leading us to pose the question, 'is it Hippocrates or hypocrisy which causes Reike to feel trapped in this most impossible situation?