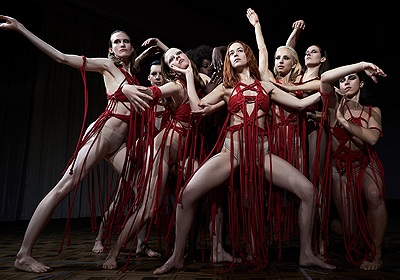 "keeps that dark, confusing and extremely gothic aura already present in the original film, but it also acquires a new rhythm"

A remake of the popular Dario Argento’s movie, Guadagnino’s take on Suspiria doesn’t completely turn away from the original, but it gives a more aesthetic tone to it.  Set in 1978 Berlin, the story follows Susie Bannion (Dakota Johnson), a young American dancer, who moves to the Capital to be part of a world renowned dance company. Her rise in the crew is almost instant. However, a dangerous secret, covered in dark magic and evil forces, is hiding between the walls of the school and Susie soon finds herself in the middle of a dangerous path.

As a director, Guadagnino likes to surprise the audience by never sticking to the same directing technique; he is deeply fascinated by movement, emotions and the extreme connection between body and mind. In Suspiria the camera moves in quick succession between close ups and panoramic views, pushing the audience to the limit and creating a dizzy and disorienting feeling that stays with you throughout the film.

Lover of everything aesthetic, Guadagnino often finds the most pleasure in being inspired by the actors and actresses working for him; in this feature, Tilda Swinton and Dakota Johnson are once again his muses. They both play women that seem uncharacteristically strong for that time. Although at first Susie, played by Johnson, seems like a deer caught in headlights, throughout the film she changes and becomes self aware and more powerful than ever, therefore changing the plot of the original film.

Swinton for the better part plays Susie’s teacher and protector, she sees something powerful in her, something that might even scare her. Her character is strong, determine and extremely nurturing.

However, what it is extraordinary about this versatile actress is the fact that Guadagnino challenges her to play multiple characters. As well as being madam Blanc, she also plays Helena Markos and also the old psychiatrist who witnesses the rise of Mother Suspiriorum and tries to help three girls from the dance company and Susie escape from the spell keeping them captive.

While portraying these two characters, thanks to the aid of makeup, Swinton is completely unrecognisable; she changes the way she talks, moves and interact with the rest of the cast, highlighting once again her superior talent and love for the craft.

Being a film about asterism and a witches coven, the dance choreographies have a hidden meaning. Guadagnino loves to capture with his camera every single movement and nuance. In one of the most important scenes, the camera moves from the faces of the dancers to a panoramic shot from above of the entire scene to showcase, first how the dance crew is in an altered state, almost unconscious and then to highlight the symmetry of their movements, the women’s body becomes a vessel to dark magic and a tool in the hands of evil to summon one of the three famous mothers.

Thanks to Guadagnino’s love for details and perfection, Suspiria still keeps that dark, confusing and extremely gothic aura already present in the original film, but it also acquires a new rhythm made by an original soundtrack from RadioHead’s Thom Yorke and cinematography that pushes the audience to feel the same confusion and queasy feeling felt by the unaware characters in the story. A hypnotic experience with a side of violence and gory details.